Lessons From the Deadliest Chemical War (That Never Happenned) 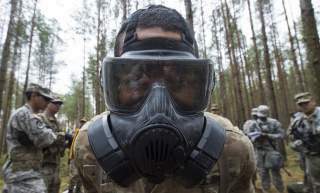 But how is it that chemical weapons were rarely used during World War II in Europe, when both Nazi Germany and the United Kingdom possessed vast stockpiles of these weapons of mass destruction?

It retrospect, it’s clear that had either side used chemical weapons, the war could’ve rapidly changed — and escalated — into a chemical conflict neither side was confident they could win. Think of it as a precursor, of sorts, to the nuclear standoff between East and West during the Cold War.

Germany’s chemical arsenal at the onset of World War II was both much larger and deadlier than what its military had during the First World War. In 1939, Germany for the first time weaponized sarin, a highly volatile, odorless liquid that turns into a gas, attacks the nervous system and kills quickly.

Between the wars, Britain considered using poison gas to suppress rebellious tribesmen in northwest India and Iraq. Winston Churchill, then Secretary of State at the British War Office, favored chemical weapons and believed them to be more humane than conventional bombings.

“Gas is a more merciful weapon that high explosive shell and compels an enemy to accept a decision with less loss of life than any other agency of war,” Churchill argued. “The moral effect is also very great. There can be no conceivable reason why it should not be resorted to.”

Churchill favored lachrymatory agents, hence tear gas, for the most part. While Churchill did contemplate using mustard gas in Iraq, ultimately Britain did not resort to chemical attacks on the “recalcitrant natives.”

Italy did use mustard gas on a large scale in Ethiopia in 1935 and 1936, and Japan used poison gas in its war in China but opted not to against the Western powers. In 1942, Britain secretly supplied chemical weapons to Australia, which stored them across the continent as part of a contingency if Japan gassed the country first.

Following the evacuation from Dunkirk, the British military readied chemicals to defend the British Isles in case of a German invasion. “We should not hesitate to contaminate our beaches with gas if this was to be to our advantage,” Churchill told his cabinet in May 1940. “We have the right to do what we like with our own territory.”

In 1942, British scientists from the Porton Down military research center began experimenting with anthrax as a biological weapon. In one infamous case, they tested this bio-weapon on sheep on the uninhabited island of Gruinard off the Scottish coast. A government quarantine of Gruinard did not end until 1990 following extensive decontamination efforts.

These experiments were in preparation for the grotesquely named Operation Vegetarian, which aimed to to scatter anthrax-infected linseed cakes across Germany. Had the plan been put into action, cattle would have eaten the cakes, died and spread the anthrax into the civilian population, while also depriving Germany of an important food source.

And though the British had vast stockpiles of gas — and were well capable of dropping them on German cities, which they were firebombing — the Soviets did not have such a program, nor did they possess an air force with the range and strength needed to penetrate German air defenses.

Thus, it would have made more sense for Germany to deploy gas against the Soviets, especially after the war shifted to the Red Army’s favor. Nazi Germany was, after all, utterly unscrupulous when it came to scorched earth tactics on the Eastern Front. But Germany did not — at least on a large scale.

Here, Britain’s stockpile may well have saved untold numbers of Soviet soldiers. In 1942, Churchill stated publicly that Britain would use its chemicals against Germany if it were to turn such weapons against the USSR.

“We know the Huns, which is the reason why we are keeping up our effort and why we are building up our storage of chemical weapons,” Churchill declared in a May 10, 1942 radio address. “I would say that should Germany again attack our ally, Soviet, with more chemical weapons, then we will start using such gas in our attacks on German cities and towns.”

Churchill later insisted to Gen. Hastings Ismay, his chief military assistant, that it was “absurd to consider morality on this topic when everybody used it in the last war without a nod of complaint from the moralists of the Church. It is simply a question of fashion changing as she does between long and short skirts for women.”

One incident of particular note occurred in in December 1943 when more than 100 German Ju-88 bombers descended on the Italian port of Bari and destroyed several Allied ships, most of them cargo and transport vessels. Among the losses was the SS John Harvey, a U.S. Liberty ship secretly loaded with 2,000 mustard bombs which the vast majority of her crew didn’t even know about.

Chemicals released in the raid killed 83 military personnel out of 628 wounded, and the Allies rushed to cover up the presence of mustard gas at Bari for fear that Germany would conclude that a chemical attack was imminent. In fact, the Allies only planned to have that gas on hand to retaliate against a German attack.

By summer 1944, Germany was fighting a two-front war in mainland Europe and defeat was inevitable. With its own demise over the horizon, Germany still did not resort to chemical weapons in the field. The Nazis did, however, use the pesticide Zyklon-B to kill Jews and other minorities during the Holocaust.

As Allied troops landed on the beaches of Normandy in June 1944, Germany could have targeted them with chemicals or nerve agents which the landing force had no protection against. But Hermann Goering, chief of the Luftwaffe, revealed at the Nuremberg trials that the German army’s heavy reliance on horses meant that a retaliatory Allied chemical attack would have severely hindered its logistical backbone.

Otto Ambros, a scientist close to the Nazi leadership, also presented to Adolf Hitler an exaggerated account of how devastating an Allied counterattack would have been had Germany deployed chemicals. Whatever the cause, it’s retrospectively evident that the Allied and Axis powers in Europe effectively deterred each other.

Incidentally, the later use of chemical weapons in the Middle East demonstrate a noteworthy pattern.

In 1960s Yemen, the Egyptian army was not deterred from using poison gas by Yemeni royalist forces since, of course, they could not respond in kind.

However, during the 1973 Yom Kippur War between Israel and a coalition of Arab states, none of the warring parties used such weapons, even as the Israelis advanced into Egypt and Syria and attained positions which could threaten their capital cities — given Israel’s possession of nuclear weapons.

Iraq is another case in point. Although Iran initiated a chemical weapons program in 1983, in response to Iraqi chemical attacks during the Iran-Iraq War, there is no concrete evidence that Iran ever retaliated in kind.

In the late 1980s, the Iraqi regime invited U.N. chemical experts to show them purported victims of Iranian gas attacks. Credible sources concluded that those individuals were likely victims of Iraq’s own careless use of these poisonous weapons.

Saddam’s army inflicted 50,000 chemical casualties on Iran during the war, with Tehran unable to mount an effective deterrence. He even gassed an Iranian city, Sardasht, killing 10 civilians and injuring up to 650. Tens of thousands of veterans of that war suffer from the effects of these weapons to the present day.

Now contrast this to the 1991 Persian Gulf War. In that case, the U.S. military made clear to Saddam that any use of non-conventional weapons would have resulted in a devastating non-conventional, hence nuclear, U.S. response.

That doesn’t mean America would have nuked Iraq, but the threat — worded by U.S. Secretary of State James Baker — was vague enough to imply it. Consequently, Baghdad did not deploy these weapons to the battlefield, even as U.S.-led forces decimated Iraq’s army.

These four Middle East case studies demonstrate that chemicals were only deployed by states when their opponents had no matching capability, if any capability at all. The pattern repeated itself in Syria when the Assad regime carried out chemical attacks in eastern Damascus.

During World War II in Europe, similarly matched capabilities meant these weapons sat in their stockpiles. This de facto deterrence possibly saved hundreds of thousands, if not millions, of civilian lives.