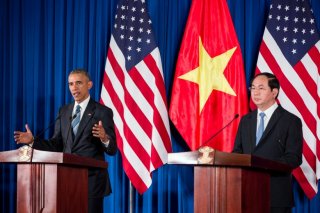 None of the US presidential candidates is keen on the Trans-Pacific Partnership. Does this mean that the treaty — signed but unratified — is finished and all that debate, negotiation and angst will have been vain?

President Obama doesn’t see it that way. He’s still plugging away in the hope of presenting enabling legislation to Congress before it breaks in mid-July for the party conventions. It is at least technically possible that Congress could approve it before the presidential election, or even in the ‘lame-duck’ post-election period before the new president takes over. But this is a big ask.

Hillary Clinton has not only come out against the agreement in its current form, but has ruled out any action in the lame duck period if she is elected.  Donald Trump wouldn’t be supporting it. Thus the best chance — if a slim one — is that President Obama sees it as so important for his own legacy that he puts in the huge effort required to see this through in his term.

Unlikely though this seems, there are TPP advocates,  including powerful sectoral interests that would benefit from the agreement signed last February. They understand that if the TPP doesn’t get through this year, it will be on the back-burner for years to come. If it doesn’t go ahead, where does that leave Obama’s ‘pivot’ to Asia? For her part Clinton, if elected, might be content to have had the TPP resolved before she takes over responsibility.

Some of the necessary prior actions have been taken. The US International Trade Commission has examined the agreement and concluded that it will benefit the USA, even if the impact on GDP is tiny.

Many members of Congress have a fixation with ‘currency manipulation’ and are still calling for counter-measures to be included in the TPP. But the compromise reached earlier was for the US Treasury to address this issue unilaterally, which it has done by spelling out more precisely what it would regard as ‘currency manipulation’.

The Treasury’s criteria illustrates the muddle that arises when bureaucrats attempt to placate public ignorance. Of the three criteria developed for identifying ‘manipulation’, only one makes any economic sense. Perhaps substantial official intervention in foreign-exchange markets might constitute ‘manipulation’ (although the Swiss authorities would regard their attempt to constrain their growth-sapping appreciation as being worth a try, even if it was ultimately unsuccessful).  But the second criterion — concern about large current account imbalances — is harder to justify. And the third — concern about bilateral imbalances (i.e the trade position between the US and its individual trading partners) — is not just nonsensical, but actually harmful. If all countries responded to large bilateral imbalances by imposing trade restrictions, global trade would shrink dramatically. A key advantage of free international trade is that a country can obtain imports from one trading partner and pay for them by exporting to another partner. The bilateral balance between individual trading partners is irrelevant.

Fortunately it is unlikely that all three criteria would be infringed simultaneously, and even if they were, the penalties imposed could be trivial. But this sop to Congressional misunderstandings illustrates the illogical compromises that arise in international rule-making.

What about the alternative set of inferior trade rules which President Obama fears China will put in place if the TPP doesn’t go ahead?

As we speak, China is negotiating a trade deal that would carve up some of the fastest-growing markets in the world at our expense, putting American jobs, businesses and goods at risk.

What he has in mind is the Regional Comprehensive Economic Partnership (RCEP), which is actually an ASEAN initiative, not a rival China ploy. The RCEP envisages a set of rules or reforms which are aimed principally at practical impediments to trade, rather than establishing high-level principles as the TPP aims to do. It won’t address some US concerns (the role of state-owned enterprises, intellectual property rights or industry/state dispute resolution), but some would argue that the TPP over-reaches on these issues. Sensibly enough, Australia regards the two trade deals as conceptually compatible and supports both.  In any case it seems most unlikely that RCEP will be completed on schedule by the end of the year (ASEAN schedules tend to slip, and the negotiating scheduleseems open-ended).

Perhaps more seriously, the case for TPP (and the characterisation of RCEP as China’s rules) is increasingly looking like a ‘contain–China’ play. In the Washington Post article, President Obama said:

America should write the rules. America should call the shots. Other countries should play by the rules that America and our partners set, and not the other way around.