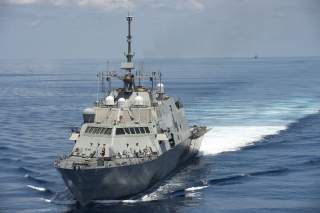 The destroyer was borne out of a singular need: counter the asymmetrical threat posed to the ships of the line by the motor torpedo and the agile boats craft that launched them.  The utility of the destroyer was quickly recognized. Once in service, commanders began retrofitting these fast, lightly armored ships to address emergent missions. This legacy of flexibility, focus, and countering the asymmetrical threat are the legacy of destroyers. This is the legacy inherited by the crews of the Littoral Combat Ships (LCS), and a legacy, despite challenges, the U.S. Navy must secure for its strategic well-being.

The response to this asymmetrical threat was the development of the Torpedo Boat Destroyer, later shortened to “destroyer.”  A bantamweight ship, the destroyer was lightly armed and armored when compared to ships of the line to achieve higher speeds.  Destroyers were optimized to screen the battleships from torpedo boats[2]. It didn’t take long to realize destroyers, with their speed and agility could also launch motor torpedoes, making the destroyer lethal against all types of surface ships[3].

As the threat evolved the destroyer matured, continuing to be adapted to other missions. When the motor torpedo was put to sea in submarines, the destroyer adapted again to hunt submarines[4].  By World War II the U.S. Navy was tailoring individual destroyers to perform new missions, such as minesweeping, troop transport, anti-submarine, or anti-air. To use today’s vocabulary, they were single-mission focused ships. Each new mission required trade-offs.  Engineers sacrificed guns to fit Marines and their boats[5] and removed torpedoes to make way for minesweeping gear[6] and more anti-aircraft guns or more depth charge launchers[7].  These conversions took a substantial amount of time in the shipyards to complete. That time and effort meant the alternations were virtually permanent. For instance, a mine sweeping destroyer would probably never be converted back to a torpedo destroyer[8].

Today’s littoral environment has evolved into a more challenging environment from the time when the destroyer was first designed. The old littoral threats: torpedo boats, mines, and diesel submarines, continue decades worth of tactical and technological advancement. Ever-more layers of complexity have been added in the form of Fast Inshore Attack Craft and missile-armed Fast Attack Craft, unmanned vehicles, and ubiquitous Coastal Defense Cruise Missile technology.

Meanwhile, our single-mission focused WWII destroyers evolved into the most broadly capable combatants put to sea bearing the designation “destroyer.”  Our modern, Arleigh Burke-class destroyers are equipped with a sophisticated sonar suite. They are capable of conducting Ballistic Missile Defense missions and long-range Anti-Air engagements using Naval Integrated Fire Control – Counter Air. With the battlespace thoroughly dominated, they carry Tomahawk missiles for projecting power ashore. The Arleigh Burke-class destroyers are as close to a no-compromise design as we can reasonably get.  They are our modern ships of the line, and they come with a hefty price tag[9]. Their cost and high tech capabilities make them less than ideal when matching up against the low-cost asymmetrical threats of today.

Unlike the original destroyers, LCS retains the ability to adapt to the threat using mission packages. Though this modular change-out is not as rapid as the optimistic predictions, it is still a capability. Even though the current concept of operations does not call for it, it is still possible to remove one type of mission package and equip another type far more quickly than could be done in the past. This change change-out is still possible in-theater without the needs for an expensive shipyard period. LCS offers force providers greater flexibility at a lower cost than fixed platforms in responding to the shifting needs of operational commanders.

LCS’s inherent flexibility offers other opportunities such as the rapid deployment of new systems or even experimental technologies, which could be deployed on LCS, as the Laser Weapons System was deployed to USS PONCE. The Navy can exploit LCS’s modularity by building and fielding new capabilities in a way that once required pulling a ship away from operational commanders. These future technologies could be our generation’s motor torpedo, again upsetting the naval order. Furthermore, LCS is our first class of ship designed from the keel up to operate unmanned air, surface, and subsurface vehicles giving LCS the ability to upgrade its combat capability through upgrading the vehicles it carries. Until recently, this flexibility was only found in aircraft carriers.

On the challenges faced by certain mission package components, it is important to distinguish the challenges of specific modules and components of modules from the modularity itself. A failure of a module or a component should not be viewed as a failure for the whole itself.  Neither the aircraft carrier nor the carrier air wing is considered a failure if a single type of aircraft fails to perform as planned. Rather the carrier-carrier air wing’s strength lies in its ability to employ new aircraft that are developed separately from the aircraft quickly, and any weaknesses in warfighting capability can be addressed without purchasing a new carrier or changing the air wing mix completely.

LCS provides the Navy’s forward deployed commanders a rapid response to evolving asymmetrical threats with adaptable force packages, and offers a platform for future use technologies to be quickly adapted disrupting the naval order. The Navy needed Torpedo Boat Destroyers – it needed the speed, flexibility, and the low cost. The Navy needed a platform that could be retrofitted as our enemies adapted their technology and tactics. Where that need has never gone away, the capability has. LCS, with its modular operating concept provides an inherently adaptable platform to fulfill these needs. In the future, it is conceivable that LCS or what follows LCS, will eventually be larger and multi-mission capable. However, it would be better if we did not abandon the legacy of the destroyers again. The Navy needs LCS to remain fast, light, modular, and ready to adapt to any asymmetrical threat. The Navy needs the LCS to accept the mantle of the destroyer’s legacy.

Commander James Davenport and Lt. Matthew Hipple are active duty Surface Warfare Officers in the United States Navy. Their opinions do not represent the Navy, DOD, or US government.