Is Lockheed Martin Getting Ready to Build a Super Patriot Missile? 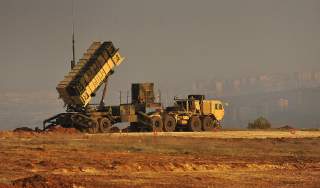 The Army is advancing effort to upgrade the radar, fire control technology and flight software for its PATRIOT missile in order to sharpen its target tracking ability against approaching enemy attacks.

The Army has awarded a contract-extension with Lockheed Martin to further develop these technological advances for the weapon.

At the end of last year, the Army’s Patriot missile destroyed a mock-enemy theater ballistic missile target in a recent test-firing in order to demonstrate new guidance technology built into the weapon, Army officials said.

The missile system also functions in tandem with the Terminal High Altitude Air Defense, THAAD, system to provide the U.S. with a “multi-tier theater defense.”

To intercept an incoming missile, it steers towards a predetermined intercept point chosen by its ground-based fire solution computer, selects the proper trajectory, and then applies a direct, body-to-body hit on the target.

In service since the early 80s, Patriot missiles have been upgraded several times, including this latest MSE software improvement. This test, which took place in December of last year, was engineered to asses an even newer target-tracking technology called Post Deployment Build, or PDB-8, service officials explained.

The full $13.4 million modification amount agreed upon for this most recent contract was obligated at the time of the award. Work will be performed at the Army Reserve Center in Grand Prairie, Texas and at the White Sands Missile Reserve in White Sands, New Mexico. The estimated completion date is January 30, 2018. Army Contracting Command, is the contracting activity.