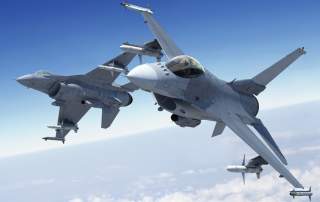 South Korea has awarded Lockheed Martin a massive $1.2 billion contract to upgrade 134 F-16 Fighting Falcons into an advanced new configuration. Once the modernization program is complete, the Republic of Korea Air Force (ROKAF) will possess some of the most advanced versions of the venerable F-16 anywhere in the world.

“We truly appreciate the trust and confidence the Republic of Korea has placed in us with this contract,” said Susan Ouzts, vice president of Lockheed Martin’s F-16 program, in a statement. “These upgrades are a critical piece of South Korea’s national defense and highlight Lockheed Martin’s commitment to the full lifecycle of the F-16, from production to through-life sustainment.”

The South Korean upgrade is based on Lockheed Martin’s advanced F-16V configuration for the long-serving Fighting Falcon—better known among its pilots as the Viper. The central feature of the modernized aircraft will be an Active Electronically Scanned Array (AESA) radar.

This is the second time that Korea has tried to upgrade its F-16 fleet. The ROKAF had originally selected BAE Systems in 2012 to perform the modernization work. However, that deal was scrapped after the U.S. Air Force awarded Lockheed Martin a contract to develop and install an F-16 modernization package called Combat Avionics Programmed Extension Suite (CAPES). CAPES would have become the standard configuration for the F-16, but the program was eventually cancelled during a budget crunch in late 2014—wreaking havoc on the fighter upgrade market.

It is possible that Seoul has once again selected the APG-84 for its upgrade program, but given that the United States Air Force prefers the APG-83, it would make more sense to install the Northrop Grumman-built radar. The APG-83 also has the advantage of using components and software that share commonality with the F-35 stealth fighter’s APG-81 radar—which Seoul is also planning to purchase. With either option, the addition of an AESA radar would massively increase the F-16’s already formidable combat capabilities.

Apart from the radar upgrade, it is not clear what other systems the Korean upgrade includes. The previous BAE Systems-designed upgrade included the Raytheon AN/ALR-69A electronic warfare (EW) suite, a Link-16 data-link, a Joint Helmet Mounted Cueing System (JHMCS), a new cockpit design and a host of new weapons. It’s likely the new Lockheed Martin-design package is as comprehensive.

F-16 upgrades are likely to be a lucrative market for Lockheed Martin for years to come. There were over 4,570 F-16s delivered to more than 25 nations around the world and new jets continue to be built. Not all of those nations who operate the F-16 will be able to afford—or will be afforded the opportunity—to by the F-35. Thus, the F-16 will continue to serve for decades to come.