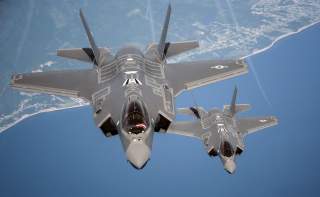 In a first-of-its kind test, the Navy used F-35B sensors as an aerial node as part of an integrated ship defense technology -- designed to destroy air and surface enemy missile threats from beyond-the-horizon.

NIFC-CA has previously operated using an E2-D Hawkeye surveillance plane as an aerial sensor node; the use of an F-35B improves the sensor technology, reach, processing speed and air maneuverability of the system; the test also assessed the ability of the system to identify and destroy air-to-air and air-to-surface targets.

"This test was a great opportunity to assess the Navy’s ability to take unrelated technologies and successfully close the fire control loop as well as merge anti-surface and anti-air weapons into a single kill web that shares common sensors, links and weapons," Anant Patel, major program manager for future combat systems in the Program Executive Office for Integrated Warfare Systems, said in a written statement.

The test was a collaborative effort across the Navy and Marine Corps, White Sands Missile Range and industry partners leveraging a U.S. Marine Corps F-35B and the U.S. Navy’s Aegis Weapon System

"This test represents the start of our exploration into the interoperability of the F-35B with other naval assets," said Lt. Col. Richard Rusnok, VMX-1 F-35B detachment officer in charge.

A multi-target ability requires some adjustments to fire-control technology, sensors and dual-missile firings; the SM-6 is somewhat unique in its ability to fire multiple weapons in rapid succession. An SM-6 is engineered with an "active seeker," meaning it can send an electromagnetic targeting "ping" forward from the missile itself - decreasing reliance on a ship-based illuminator and improving the ability to fire multiple interceptor missiles simultaneously.

“NIFC-CA presents the ability to extend the range of your missile and extend the reach of your sensors by netting different sensors of different platforms -- both sea-based and air-based together into one fire control system,” Capt. Mark Vandroff, DDG 51 program manager, told Scout Warrior in an interview last year.

The NIFC-CA system successfully intercepted a missile target from beyond the horizon during testing last year aboard a Navy destroyer, the USS John Paul Jones. The NIFC-CA technology can, in concept, be used for both defensive and offensive operations, Navy officials have said. Having this capability could impact discussion about a Pentagon term referred to as Anti-Acces/Area-Denial, wherein potential adversaries could use long-range weapons to threaten the U.S. military and prevent its ships from operating in certain areas -- such as closer to the coastline. Having NIFC-CA could enable surface ships, for example, to operate more successfully closer to the shore of potential enemy coastines without being deterred by the threat of long-range missiles. In particular, NIFC-CA is the kind of technology which, in tandem with other sensors and ship-based weapons, could enable a larger carrier to defend against the much-discussed Chinese DF-21D "carrier-killer" missile. The emerging DF-21D is reportedly able to strike targets as far as 900 nautical miles off shore.