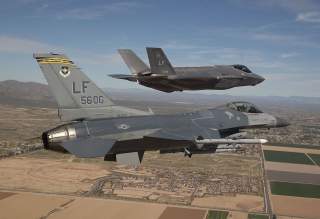 The Lockheed Martin F-35A conventional takeoff variant of the stealthy tri-service Joint Strike Fighter is making its first operational deployment to Europe. While the Pentagon says that the deployment was long planned, the Defense Department notes that the F-35s are being sent across the Atlantic as part of the European Reassurance Initiative—which aims to bolster the confidence of America's’ NATO allies and deter Russia.

“The U.S. Air Force will deploy a small number of F-35A Lightning II aircraft this weekend on a long-planned training deployment to Europe,” the Pentagon said in a statement released on April 14. “The aircraft are scheduled to conduct training with other U.S. and NATO aircraft based in Europe for several weeks as part of the European Reassurance Initiative.”

The F-35 deployment comes while relations between Russia and the United States are at a post-Cold War low, but the U.S. Air Force’s primary goals are to learn about how the new jet performs in a deployed operational setting. It is also an opportune moment to familiarize European allies with the new stealth fighter’s capabilities. The F-35 will eventually form the backbone of NATO’s airpower.

“This training deployment signifies an important milestone and natural progression of the F-35 program, allowing the Air Force to further demonstrate the operational capabilities of the fifth generation fighter aircraft,” the Pentagon statement reads. “It also assists in refining requirements for eventually basing the F-35A in Europe, which is scheduled to receive the aircraft in the early 2020s.”

The Pentagon says the U.S. Air Force will provide more information about the F-35 unit’s activities in Europe once the aircraft arrive in theatre. “Once the aircraft arrive in Europe, U.S. Air Forces in Europe and U.S. European Command will release additional information as it becomes available about the F-35A's training deployment,” the Pentagon statement reads.

While the details are not yet available, these sorts of deployments are commonplace. Typically, during such deployments, fighter squadrons learn to fly together with units they don’t often get a chance to operate with on a day-to-day basis. Additionally, deployed units will often conduct dissimilar air combat training exercises against different types of aircraft from different air forces. The goal is to learn about each other’s capabilities and how to operate together seamlessly in the event of war. What is different about this particular case is that the F-35 is just entering service—there is a first time for everything.

The Pentagon release ends with a standard plug for the often-embattled F-35—which has suffered innumerable delays, technical glitches and cost overruns since it entered full-scale development in 2001. “The F-35A is a fifth generation fighter that provides the joint warfighter unprecedented global precision attack capability against current and emerging threats, while complementing the Air Force's air superiority fleet. The F-35A is a multi-role precision attack fighter with unmatched lethality, survivability, and interoperability,” the statement reads.

Hopefully, after 16 years of development work—which has not yet been completed—and tens of billions of dollars of taxpayer dollars spent, the F-35 lives up to Lockheed Martin’s marketing hype.