Lockheed's Long-Range Anti-Ship Missile Looks Like a Killer. And China Should Be Afraid. 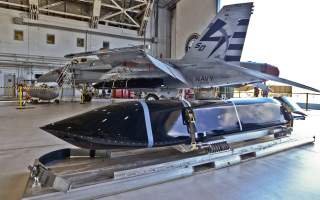 The United States has conducted its sixth successful test of a new long-range antiship missile.

On March 19, Lockheed Martin released a press statement saying that the U.S. Air Force had successfully tested Lockheed’s Long-Range Anti-Ship Missile (LRASM) off the coast of California. “During the test, a B-1B from the 337th Test Squadron at Dyess Air Force Base, Texas, launched a LRASM over the Sea Range at Point Mugu, Calif., successfully impacting the maritime target and meeting test objectives,” the press release said.

David Helsel, the LRASM program director at Lockheed, was quoted in the press release as saying, “LRASM has now proven itself in six consecutive flight missions. . . . The reliability and outstanding capability of LRASM will provide an unmatched weapon to our warfighters in their quest for sea control in contested environments.”

LRASM is a DARPA and U.S. Navy-funded program meant to provide the U.S. Navy and Air Force with an offensive antisurface weapon (OASuW) to counter the growing threats from antiaccess/area-denial (A2/AD) doctrines. The program was begun under DARPA in 2009 and leverages existing technology from the Joint Air-to-Surface Standoff Missile Extended Range (JASSM-ER) program. Its development was fast tracked under the Pentagon Better Buying Power 3.0 program, with the expectation that it would serve as a stopgap solution to compensate for the Navy’s aging Harpoon antiship missiles. LRASM has a reported range of five hundred nautical miles, and carries a one-thousand-pound penetrator and blast-fragmentation warhead.

LRASM is primarily designed to provide the U.S. Navy and Air Force with a precision-guided long-range standoff capability that can survive in aggressive electronic-warfare environments. To achieve this, it uses onboard sensors and a semiautonomous guidance system to reduce its dependence on intelligence, surveillance and reconnaissance (ISR) platforms, network links and GPS navigation. It also employs “innovative terminal survivability approaches and precision lethality” to avoid advanced enemy countermeasures while still reaching its intended target.

Lockheed first tested LRASM against a moving target in 2013. That test was also conducted by a B-1B bomber flying from Dyess Air Force Base in Texas and launching the missile over the Sea Range at Point Mugu, California. After the missile was released, according to a Lockheed press release at the time, it “navigated through all planned waypoints receiving in-flight targeting updates from the Weapon Data Link. After transitioning to autonomous guidance, LRASM identified the target using inputs from the onboard sensors. The missile then descended for final approach, verified and impacted the target.”

Another milestone in the program was reached in July of last year, when Lockheed conducted its first test of a modified LRASM from a shipborne launcher. Although the accelerated LRASM program will initially produce missiles for aircraft, the U.S. Navy eventually wants to put them on ships. The reason is simple: quantity. As Sydney Freedberg explained at Breaking Defense: “At the very maximum, with nothing held back for defense (which would be tactical insanity), an entire carrier air wing of 44 fighters could only carry 88 LRASMs, while a single Arleigh Burke destroyer could carry 96.” The extra antiship firepower is badly needed, as the U.S. Navy has allowed its capabilities in this area to atrophy in recent decades. For a long time, America’s naval ships relied on the increasingly archaic Harpoon missile to fight against adversaries’ surface fleets. That missile, which was first deployed in the 1970s, only has a range of seventy to 150 miles, depending on the variant. This put the U.S. Navy at a disadvantage compared to countries like China and Russia.

In 2016, the Pentagon began modifying the SM-6 Standard Missile, which is usually used for antimissile and air-defense missions, to serve as an immediate stopgap capability. In its antiship variant, the SM-6 has a range of over two hundred miles but an extremely small warhead relative to the Harpoon. LRASM will combine the best of both worlds: a missile with a long range and massive warhead, on top of its ability to operate in electronic-warfare environments.

While it will someday be on ships, LRASM will initially be operated by the U.S. Air Force from its B1-B bombers and the U.S. Navy from the F/A-18E/F, which operates from aircraft carriers. Last July, Lockheed announced it had won a $86.5 million contract to begin building the first “production” LRASM missiles for aircraft, compared to earlier missiles that were purchased only for testing. The defense firm has since said LRASMs will begin being integrated onto the B1-B bombers some time this year, with F/A-18s coming next year.