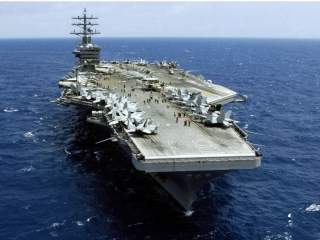 India hopes to build its own indigenous nuclear-powered aircraft carrier—complete with electromagnetic catapults—with the cooperation of the United States. In recent years, Washington and New Delhi have drawn closer together in the maritime security realm, due in part to China’s more expansive maneuvering in both the Pacific and Indian Oceans.

The South Asian nation is already building a conventionally powered indigenous carrier called Vikrant, which India expects to commission into service in 2017. However, the 40,000-ton Vikrant follows a design philosophy similar to Russian vessels like the 45,000-ton INS Vikramaditya—which was originally commissioned into the Soviet Navy as Admiral Gorshkov. After extensive modifications that included the removal of its missile armament, the former Soviet vessel was equipped with a ski-jump aircraft launch system. The smaller indigenous Vikrant is being built along those same lines with a ski-jump.

While the Russian ski-jump design is simpler, easier to build and cheaper—it does have limitations. A ski-jump does not allow for strike aircraft to takeoff with full weapons and fuel loads. Moreover, lower performance aircraft like surveillance planes have difficulty getting airborne using ski-jumps. That limits the overall performance of the carrier air wing. A catapult design, while more complex and expensive, allows for a much wider range of aircraft weights and performance. As such, most carrier navies tend to favor catapults. Even the Soviets planned to install a catapult launch system onboard Ulyanovsk—Moscow’s last incomplete carrier before collapse of the Soviet Union.

As such, the Indians are abandoning the Soviet design philosophy in favor of nuclear-powered ships that are patterned after the U.S. Navy’s Gerald R. Ford-class carriers. According to Indian navy chief Admiral Robin Dhowan—who spoke to the Economic Times—the service’s Naval Design Bureau (NDB) is working on a 60,000-ton to 65,000-ton carrier for its second and third indigenous flattops. While no final decision has been made, Dhowan told the Indian business daily that the service is considering both General Atomics’ Electromagnetic Aircraft Launch System (EMALS)—which was developed for Ford—and nuclear propulsion. The Indian interest in the EMALS technology comes shortly after Indian defense minister Manohar Parrikar visited the Nimitz-class carrier USS Dwight D. Eisenhower (CVN-69) [pictured] with U.S. defense secretary Ashton Carter.

India and the United States have drawn closer in recent years, with Washington now far more open to military cooperation with New Delhi. Parrikar and Carter held a joint press conference at the Pentagon shortly before they visited Eisenhower to tout the two nations’ progress on their bilateral Defense Technology and Trade Initiative agreement. “Minister Parrikar and I discussed the progress that has been made towards cooperation on jet engines, and aircraft carrier design and construction, as well as opportunities to collaborate on additional projects of interest, which will also further Prime Minister Modi's Make in India policy,” Carter said during the Dec. 10 press conference.  “Later this afternoon, we'll observe live flight exercises on the USS Eisenhower, making Minister Parrikar the first Indian defense minister to go about a U.S. aircraft carrier. This speaks not just our important aircraft carrier technology cooperation, but to our expanding cooperation in maritime security, as well.”

Parrikar, for his part, reiterated India’s desire for greater collaboration on areas of high-technology where New Delhi can benefit from the American know-how.

“I have conveyed to Secretary Carter our desire to further collaborate in the higher-end tasks. . . technologies within the framework of DTTI.  We also reviewed the cooperation between our armed forces which have grown stronger,” Parrikar said.  “Today, India I'm pleased to say is conducting more military exercises with U.S. than any other country. Our cooperation in the area of maritime security is also becoming stronger, especially in the Indian Ocean region, where India is playing its due role and responsibility of net security provider.”