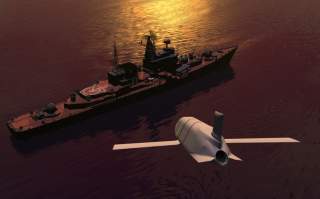 The United States Navy and Lockheed Martin hope to demonstrate the launch of a AGM-158C Long Range Anti-Ship Missile (LRASM) from a Mk41 vertical launch system onboard one of the service’s cruisers or destroyers in the coming months.

“They [Lockheed] would like to take a Navy ship and do a vertical launch,” Capt. Jamie Engdahl, Naval Air Systems Command program manager for precision strike weapons told an audience at the Navy League’s Sea, Air and Space symposium on May 17. “If I’m guessing right, I think you’ll probably see that happen over the next several months.”

If the Navy were to eventually field the new weapon as a ship-based anti-surface weapon, the LRASM would enormously increase the offensive anti-ship capability resident onboard U.S. Navy surface combatants. The service needs to boost the anti-ship capabilities of its warships in light of a resurgent Russia and an increasingly capable Chinese People’s Liberation Army Navy fleet. Indeed, the entire LRASM program is being driven by an urgent operational need in the Western Pacific. As a weapon designed specifically to counter the emerging anti-access/area denial (A2/AD) threats in the region, the stealthy LRASM is extremely long-range, semi-autonomous and does not rely on GPS or data-networks. Engdahl bragged that LRASM is the “smartest weapon” in his portfolio.

Lockheed Martin—which developed the LRASM in conjunction with DARPA from AGM-158B JASSM-ER cruise missile—is taking the lead in the demonstration effort, but the Navy is part of the team, Engdahl said. He noted that the weapon has previously been tested from the Mk41 vertical launcher from a land installation, but the shore environment is quite different from dynamic at-sea conditions.

But while the demonstration will focus on surface ships, there are no current plans to adapt the weapon for use onboard an attack submarine. However, Engdahl said that once the weapon has been proven to work from a surface ship, adapting the LRASM for submarines is a simple matter of platform integration—there is no real technical risk involved. “There’s not much benefit to demonstrating that capability,” Engdahl said. “The next step would be to launch LRASM from a moving ship—that’s why the company is interested in doing that demonstration.”

The Navy has not decided to buy the LRASM for its surface ships just yet, but the weapons is a contender for the Offensive Anti-Surface Warfare (OASuW) Increment 2 capability. That program will field a next-generation anti-ship missile for the Navy’s surface combatants like the Ticonderoga-class cruiser and Arleigh Burke-class destroyers. However, the Increment 2 is likely going to be an open competition with many industry competitors involved. Thus, it faces competition from host of other developments—including a new Tomahawk variant.

Meanwhile, development of the LRASM to fit the Navy’s Increment 1 urgent requirement is proceeding steadily. The team will undertake their final design review in about three weeks, Engdahl said, after which it will enter into its test phase. It’ll be first integrated onboard the U.S. Air Force’s B-1B Lancer strategic bomber in 2018 and shortly thereafter on the Boeing F/A-18E/F Super Hornet in 2019, Engdahl said.

Compared the regular 10-year development cycle, if LRASM is fielded on-time, the Navy will have taken only four years to complete development of the new weapon, Engdahl noted.