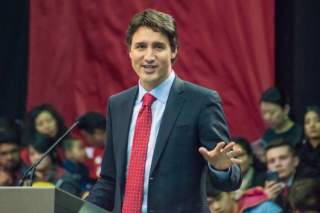 On October 19, 2015 Canadians voted for a new government. Although opinion polls indicated a close outcome, leaving many pundits to speculate about a hung parliament, what occurred was a surprise Liberal Party landslide. Led by the 43-year old Justin Trudeau, son of former Prime Minister Pierre Trudeau, the Liberal victory was an impressive comeback for a party that was relegated to the third place in the last election and regarded as possibly fading off into the mists of history.  A new Trudeau government is set to lead the world's 11th largest economy and the number one trade partner with the United States.

Prior to October 19th, Canada's political life was dominated by its 22nd Prime Minister Stephen Harper, who brought his Conservative Party into office in 2006 and won re-election in 2008 and 2011. Under Harper, Canada enjoyed a long stretch of economic growth, its banks avoided the excesses of the mortgage binge south of the border, taxes were reduced, the size of the federal government shrank and considerable effort was given to streamline and improve the means of selecting immigrants.  The Harper government promoted energy exports, which paid handsomely for a number of years. On another front, relations between the federal and provincial governments, the source of past constitutional crises in Canada, were generally peaceful.

While there were positive developments during the Harper years, promises to make the national health care system more cost-efficient failed. There was little headway in reducing barriers to trade and the movement of labor across provincial borders. Efforts to match the military's mandate to actual capabilities also lagged. Furthermore, environmental issues were put on a back burner, with Canada leaving the Kyoto Protocol in 2011 and questions have been raised over the impact of environmental damage in the oil patch.

On the foreign policy front, relations with the United States were correct, but hardly warm due to differences over the Canadian interest in pipeline expansion and the Obama administration’s opposition.  At the same time, Harper downplayed the Canadian role at the United Nations and placed a greater emphasis on bilateral relations and trade agreements, sealing deals with South Korea and the European Union. He also made Canada an active participant in the newly agreed Trans-Pacific Partnership (TPP).

Harper generally remained true to his conservative roots, which struck a chord among enough Canadians to get his party elected three consecutive times. University of Calgary historian David Bercuson notes that Harper "tried to get the message across that there are certain things that people should be doing for themselves. And so he took money out of the government's hands and put it in our hands. He really did it. All in all, he was a good prime minister."

Why then did Harper and the Conservatives lose the 2015 elections?  After three terms in office, the Conservatives were tired and Canadian voters clearly wanted a change.  As The Globe and Mail's John Ibbitsson observed:  "At the end, his government was exhausted; most of its best talent had left and those who remained, Mr. Harper especially, had nothing new and interesting to offer other than condescending contempt for other contenders."

At the same time, the Harper government's pro-energy program and its traditional dependence on other commodity exports exposed Canada to the savage downturn in global commodity prices. According to the International Monetary Fund (October 2015), Canada's real GDP growth is set to fall from 2014's 2.1 percent to 1.0 percent this year, with a weak recovery forecast for next year.  Unemployment sits at 7.1 percent (as of September), which is up from last year's 6.9 percent and a worry to many Canadians.

Although the government was able to offset some of the commodity price downturn by supportive monetary policy and a weaker exchange rate, the headlines of thousands of jobs lost in the energy and mining sectors dampened the appeal of another Conservative government.

Another issue facing Canada and something which probably hurt the Conservatives is middle class angst.  According to the polling firm, Ekos, more than 40 percent of 25-to-44 year olds indicate they earn less than their fathers at the same age. (The Economist, October 17th, 2015)  Frank Graves of Ekos noted: "Restoring middle-class progress is the key issue in this election."

While the Conservatives struggled, the Liberals surged past the incumbent Conservatives and their challenger from the left, the New Democratic Party (NDP).  Trudeau was a far more attractive figure than the NDP leader, Thomas Mulcair, who seemed to plod along, hitting one misstep after another with voters.  Moreover, the NDP's more socialist leaning and answers to Canada's problems appeared to be much like old wine in new bottles, leaving the centrist Liberals the party that held some degree of hope of boosting the economy (through a C$60 billion infrastructure stimulus program) and helping the middle class.

The results of the election verified the Liberals’ new attractiveness to Canadian voters. The Liberals captured an outright majority of 184 seats, with close to 40 percent of the total popular vote.  The Conservatives won close to 32 percent of the popular vote, holding on to 99 seats, down from a commanding 166 they had captured in 2011.  The NDP, which lost considerable ground in Quebec, won a meager 44 seats (down from their 2011 showing of 103).  The separatist-leaning Bloc Quebecois clawed back a handful seats of seats, winning 10 seats, all in Quebec and a lone seat went to the Green party.

The Liberal victory should not be downplayed. Although Trudeau has his own set of detractors, he managed what The Globe & Mail called "a stunning reversal of a party that was written off after winning only 34 seats in the last election." In terms of policies, the new Liberal government will shift from the relatively tight control over fiscal spending that characterized most of the Harper years, to more state spending to stimulate the economy. Indeed, during his campaign, Trudeau indicated a willingness to run a budget deficit until 2019 to pay for a new (and needed) infrastructure program over the next 10 years.  No doubt, he will also move on his campaign pledge of raising taxes on higher-income Canadians, giving tax breaks to the middle class, and revamping an array of child benefits. He further pledged to review environment assessments and hammer out a federal-provincial deal on the environment.

The new government faces a heavy foreign policy agenda. Trudeau has talked about withdrawing Canadian fighters from air strikes against the Islamic State and accepting more Syrian refugees.  He will also attend the upcoming G20 meeting in November, where Canada’s positions will be up for discussion.  After that, there is an APEC (Asia Pacific Economic Cooperation) summit, where he will no doubt be asked if Canada will ratify the new trade agreement between the 11 member states.

And then there is the U.S. relationship, which has prospects for improvement considering a greater ideological affinity (especially on the environment) between an incoming Trudeau administration and the Obama administration. However, withdrawing from air strikes against the Islamic State and potential disagreements over the Trans-Pacific Partnership could leave areas for tensions.

The Liberal victory in Canada is much like an unexpected thunderclap, taking many Canadians and Canadian observers by suprise. As the dust settles in the election's aftermath, it is clear that Trudeau has a solid mandate from the people for change. The new leader has an ambitious platform to revive the middle class, make politics less opaque and more collaborative than during the Harper years, and reinvigorate the economy. Along these lines, Trudeau has much to prove and a large increase in spending does not substitute for leadership. Canadians have long identified Justin Trudeau as Pierre Trudeau's son; now they have to measure him as the national leader. These are challenging times and there is plenty of room to disappoint high expectations. We wish the new Prime Minister well as he has his work cut out for him.