Is Malaysia Slipping into Dictatorship? 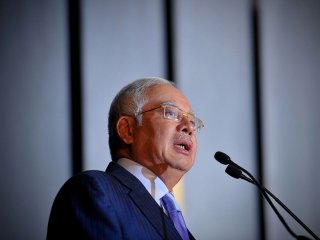 On Saturday, as the Diplomat reported, Malaysia’s former deputy prime minister, Muhyiddin Yassin, released a statement on Facebook warning that the country was slipping into dictatorship. Yassin lashed out against Prime Minister Najib tun Razak for overseeing this reversal from democracy. “In the face of public outrage at his leadership, Najib is using all the power that he has to suppress the voice of the opposition and silence his critics,” warned Yassin. “We are really witnessing the collapse of democratic institutions and the emergence of a new dictatorship.”

This was not new criticism by Yassin, but it was probably his harshest attack on the prime minister to date. Najib sacked Muhyiddin Yassin last year, after earlier revelations in the 1MDB scandal reportedly prompted Yassin to call for Najib to step down. Yassin’s political career has been on a downward spiral ever since. Last week, already stripped of his Cabinet position, Yassin was also suspended as the deputy president of UMNO, the main party in the governing coalition.

Yassin’s statement echoed a similar one released by former prime minister Mahathir Mohamad last week. Mahathir, who has been harshly criticizing Najib for more than a year over allegations of widespread graft by Najib and his family members, last week blasted Najib’s leadership once more. Mahathir, like Yassin, claimed that the prime minister was leading Malaysia into a dictatorship, toward becoming a country little different from Asia’s most authoritarian regimes.

Over the past year, Mahathir, who has never seemed able to stomach any of his successors, and the current prime minister have battled publicly, and through proxies. Najib reportedly arranged for an intraparty putsch that ousted Mahathir’s son as chief minister of Kedah state in early February. Some Malaysian reports suggest that the Malaysian authorities are also probing members of Mahathir’s family’s business dealings, and Malaysian police are investigating Mahathir for allegations of slander related to some of his blog postings. Although it still seems unlikely that police will pursue a case that could wind up with the ninety-year-old Mahathir in jail, the investigation serves as a further warning of Najib’s desire to maintain total control over his party. Earlier this week, facing pressure on so many fronts, Mahathir resigned from the ruling party.

Certainly, neither Mahathir nor Yassin is an ideal messenger to warn of threats to Malaysian freedom. Mahathir memorably sacked his then-deputy, Anwar Ibrahim, in 1998 after Anwar clashed with the prime minister over monetary policy and over the need for greater freedoms within the ruling party and in Malaysia in general. Mahathir then continued to dominate government as the authorities pursued a highly dubious case against Anwar for sodomy. (The governments of Najib and predecessor Abdullah Badawi would pursue a second, equally dubious case against Anwar a decade later.)

But the criticisms delivered by Mahathir and Yassin hit home. Over the past two years, Malaysia under Najib has shifted from a hybrid regime in which a relatively vibrant civil society coexisted with a moderately repressive government toward outright authoritarianism. Within the governing coalition, Najib and his allies have virtually eliminated dissenters. The government also has undercut the independence of vital institutions ranging from the office of the Attorney General to the central bank. Legislation making it easier to criminalize dissent, and Anwar’s jailing in the second sodomy case, has decimated the opposition coalition, a disparate group of parties that needed Anwar’s experience and magnetism to hold the alliance together.

The government has tried to suspend or block access to independent Malaysian media outlets, and Malaysian courts have even upheld the government’s ban on T-shirts worn by the Bersih civil society group; the government claims that the shirts are a threat to national security. With Mahathir leaving the party, and likely to launch more attacks on Najib, the country’s backsliding could get worse—quickly.

Joshua Kurlantzick is a senior fellow for Southeast Asia at the Council on Foreign Relations. This article first appeared in Asia Unbound.