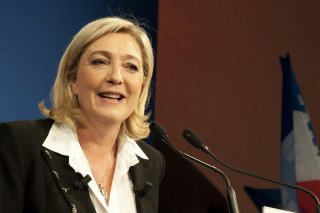 Le Pen gained one point to 23 percent in an Odexa poll conducted after the attack. Her three main competitors all dropped half a point each, but front-runner Emmanuel Macron is now considered a lock to finish in the top two Sunday with 24.5 percent’s support.

Communist-backed Jean-Luc Melenchon and conservative Francois Fillon both stand at 19 percent. Their hopes of making it to the run-off election rely on their ability to catch Le Pen, as Macron is outside the margin of error.

The attack has overshadowed the last days of the election campaign and the candidates cancelled their events Friday. Le Pen called for the expulsion of terror suspects and the immediate closure of France’s borders.

“This war against us is ceaseless and merciless,” she said in an address, lambasting the “monstrous totalitarian ideology” behind the attack.

Fillon said he would bring an “iron fist” to the fight against “Islamist totalitarianism,” while Macron accused his competitors of making false promises to the people.

“There’s no such thing as zero risk,” Macron said. “Anyone who pretends [otherwise] is both irresponsible and deceitful.”

U.S. President Donald Trump weighed in on the situation in an interview with the Associated Press. Trump said Le Pen is the “strongest on borders, and she’s the strongest on what’s been going on in France,” which many regarded as a subtle endorsement of the National Front leader.

Trump said he was simply making a prediction and not an endorsement with his remarks.

“Everybody is making predictions on who is going to win. I’m no different than you,” Trump said.