Marines: “We Plan To Have the MV-22B Osprey for at Least the Next 40 Years” 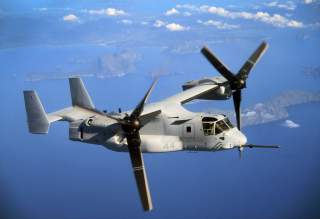 The Marine Corps is accelerating a massive modernization and readiness overhaul of its MV-22 Osprey to upgrade sensors, add weapons, sustain the fleet and broaden the mission scope -- as part of an effort to extend the life of the aircraft to 2060.

“We plan to have the MV-22B Osprey for at least the next 40 years,” Capt. Sarah Burns, Marine Corps Aviation spokeswoman, told Warrior Maven.

As a result, Corps developers explain that the aircraft has, to a large extent, had trouble keeping pace with needed modernization and readiness enhancements. This challenge has been greatly exacerbated by a major increase in Combatant Commander requests for Ospreys, particularly since 2007, Corps officials say.

Given this scenario, the Corps is implementing key provisions of its Common Configuration, Readiness and Modernization (CC-RAM) Plan which, according to Burns, is “designed to achieve a common configuration and improve readiness to a minimum of 75-percent mission capable rate across the fleet.”

Corps officials said the idea with Osprey modernization and sustainment is to build upon the lift, speed and versatility of the aircraft’s tiltrotor technology and give the platform more performance characteristics in the future. This includes arming the Osprey with rockets, missiles or some kind of new weapons capability to support its escort mission in hostile or high-threat environments.

The common thread here is that airframes themselves, while often in need of enhancements and reinforcements, often remain viable if not highly effective for decades. The Osprey therefore, by comparison, is much newer than the B-52 or Chinook, to be sure. This is a key reason why Burns emphasized the "common" aspect of CC-RAM, as the idea is to lay the technical foundation such that the existing platform can quickly embrace new technologies as they emerge. This approach, widely mirrored these days throughout the DoD acquisition community, seeks to architect systems according to a set of common, non-proprietary such that it helps establish a new, more efficient paradigm for modernization.

In a concurrent and related development, the Navy is working on its own CVM-22B Osprey variant to emerge in coming years. The project has gained considerable traction ever since the service decided to replace the C-2 for the important Carrier Onboard Delivery (COD) mission with the Osprey.

The Navy Osprey is designed to enable 1,150 miles of flight to the ship with extended fuel tanks. Alongside a needed range increase, the new aircraft will also include a new radio for over-the-horizon communications and a built-in public address system, service officials said.

The new Osprey, slated to first be operational by the early 2020s, will perform the full range of missions currently executed by the C-2s. This includes VIP transport, humanitarian relief mission and regular efforts to deliver food, spare parts and equipment for sailors aboard carriers.

The Navy Osprey variant will take on a wider set of missions than those performed by a C-2. Helicopter or tilt-rotor carrier landings do not require the same amount of preparation as that needed for a C-2 landing; there is no need for a catapult and a tilt-rotor naturally has a much wider envelope with which to maneuver.