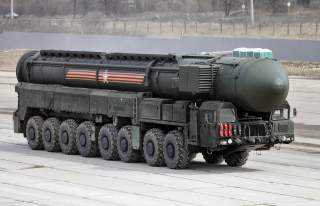 U.S. Defense Secretary James Mattis is adamant that Russia’s recently unveiled nuclear weapons delivery vehicles will not change the strategic balance between Washington and Moscow. Moreover, Mattis said that he believes that Russia is wasting its money in developing weapons to overcome American missile defenses because those systems are simply not capable of taking on the Kremlin’s nuclear arsenal.

“We can dismiss some of this as election rhetoric on the eve of an election and that sort of thing, but as I went through and looked at the clips of what he showed on the videos and all, I get paid to make strategic assessments, and I would just tell you that I saw no change to the Russian military capability,” Mattis told reporters on March 10.

“And each of these systems that he's talking about that are still years away, I do not see them changing the military balance. They do no impact any need on our side for a change in our deterrent posture, which would be certainly an indication I registered this assessment with something that was changing.”

Mattis argues that the Russians have entered into a one-sided arms race where the Kremlin is the only one playing.

“Let me talk about the end-state, how many years away they are, how much money they want to put into this arms race that they're creating with themselves,” Mattis said. “At the end of the day, they can sink all of that money in; it does not change my strategic calculation. I just assumed it would all happen at great expense to the Russia people. It doesn't change anything.”

Mattis argues that the new Russian capabilities are superfluous because American missile defenses are not designed to intercept the Kremlin’s weapons.

“They say they can hit any city by getting through defenses,” Mattis said. “We have never said that we have a missile-defense system against Russia. It's always been against one thing—rogue nations. And let me be very clear on those: North Korea and Iran.”

Mattis flatly states that U.S. missiles defenses would not work against Russian weapons. “And that's why the ones [missile defense sites] are in Eastern Europe,” Mattis said. “They would not work. And the Russian officers are professional enough and are technically skilled enough, they know what their politicians say is wrong. They will not work against Russians, and they're not designed to.”

The Russians, however, do not believe that there is a realistic threat from Iran and are suspicious of the fact that American missile defense sites are very close to their borders in Eastern Europe. Moscow’s suspicion is that the U.S. missile defense system is designed to blunt its retaliatory second strike capability—and even if the system is too rudimentary to neutralize Russian missiles today, that might not be the case three decades from now. Thus, Russia has embarked on a program to overcome any foreseeable American missile defense capability—in the event Washington does develop a more robust capability.

For the Pentagon, however, the overall strategic balance remains intact. Since the dawn of the missile age, the Kremlin has had the capability to reduce the United States to smoldering pile radioactive ash just as Washington has the ability to reduce Russia to charred radioactive moonscape.

“So what I'm saying is they have the capability to do right now what he [Putin] was touting,” Mattis said. “So it doesn't change anything, other than how much money do they want to spend on something that does not change at all the strategic balance.”