McCain and Graham Play Mad Libs for Hard-Liners on Cuba 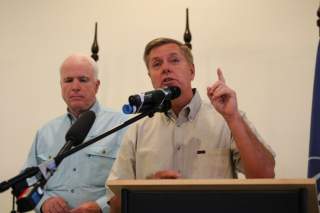 We agree with President Obama that he is writing new chapters in American foreign policy. Unfortunately, today’s chapter, like the others before it, is one of America and the values we stand for in retreat and decline. It is about the appeasement of autocratic dictators, thugs, and adversaries, diminishing America’s influence in the world. Is it any wonder that under President Obama’s watch our enemies are emboldened and our friends demoralized?

Unfortunately, we fear the most damaging chapter to America’s national security is still being written. We dread the day President Obama takes to the podium to announce a nuclear deal with the Iranian ayatollahs which does little, if anything, to deter their nuclear ambitions, placing our nation and our closest allies in even deeper peril.

This criticism, of course, came in reaction to President Obama’s dramatic announcement that he would pursue normalized relations with Cuba. But look again at McCain and Graham’s words. Notice how none of them actually have anything to do with Cuba. There is not a single fact or analytical conclusion about Cuba that explains their opposition to having diplomatic relations with that country. Rather, the two senators provide a familiar litany of clichés and buzzwords: “Retreat,” “decline,” “appeasement,” “diminishing America’s influence.” It reads more like a game of Mad Libs for hard-liners than a policy statement.

Moreover, the few more concrete assertions that McCain and Graham do make seem to simply be wrong. They assert that “our enemies are emboldened and our friends demoralized” by Obama’s policy reversal on Cuba. Which friends, exactly? McCain and Graham don’t say. And it’s hard to imagine who they might be, given that just two months ago at the UN General Assembly, that body voted for the twenty-third time to adopt a nonbinding resolution condemning the U.S. embargo on Cuba. 188 out of 193 nations voted in favor of the resolution this year, with only the United States and Israel voting against it, and Palau, the Marshall Islands and Micronesia abstaining.

The reality is this: while the embargo made sense throughout the Cold War, the end of that long struggle left Cuba “strategically irrelevant,” as Doug Bandow wrote here at TNI in 2012. It is “a poor country with little ability to harm the United States,” in Bandow’s words, and “its survival has no measurable impact on any important U.S. interest.” The regime in Havana is a nasty, repressive one—but it’s certainly no worse than any number of other autocracies, such as Saudi Arabia, with whom we have diplomatic relationships. And while engaging with Havana through trade and diplomacy probably won’t lead to human-rights improvements in Cuba, it’s not as if the current policy was doing that either. As Daniel Drezner put it at the Washington Post, “Anyone who tells you that the sanctions just needed more a little time to work is flat-out delusional. After more than a half-century, they were never going to work.”

McCain and Graham’s framework for assessing the Cuba shift assumes that any act of diplomatic engagement with a hostile country is by definition an act of “appeasement.” It’s the same mentality that led McCain, in December 2013, to react to the news that Obama had shaken hands with Raúl Castro by saying, “Neville Chamberlain shook hands with Hitler.” This is precisely the wrong way to look at foreign policy. Rather, America should strive to maintain normal relations with as many countries as possible, unless the country in question is such an extreme security threat that doing so is impossible, or so implacably opposed to us on every issue that doing so is pointless. Obama’s decision on Cuba yesterday was a welcome and long-overdue step in that direction.