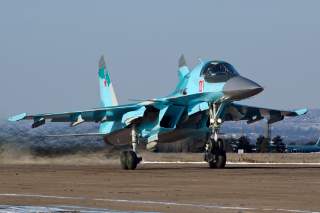 Based on the Soviet Union’s potent Sukhoi Su-27 Flanker air superiority fighter, the Su-34 Fullback is the Russian Air Force’s long-range strike aircraft of choice. Though the new bomber, which has performed extremely well during the Kremlin’s campaign in Syria, was in development during the final days of the Soviet Union, the current iteration of the Fullback is in many ways a much more advanced and capable jet than what its designers has originally envisioned.

The conceptual origins of what would eventually become the Su-34 started in 1983 when the Soviet Union started to look for a replacement for the long-serving Su-24 Fencer bomber, but one that could defend itself against the American-built McDonnell Douglas F-15 Eagle and the General Dynamics F-16 Fighting Falcon. The Sukhoi design bureau immediately leveraged its tandem seat Su-27UB design—what would eventually become the Su-30—but the Soviet Air Force preferred side-by-side seating for the long-range strike role. Thus, the Su-27IB was born.

During the later half of the 1980s, the Soviets developed the jet’s distinctive bulbous cockpit with its crew access via a ladder in the front wheel well and refined the airframe. Engineers at the Sukhoi OKB added canards for load alleviation and revised the Flanker’s complex variable geometry inlets while strengthening the airframe’s gross takeoff weight. The resultant airframe had about 30 percent more volume but had reduced max speed of Mach 1.6 and less agility than the Su-27 air superiority fighter. Meanwhile, the Su-27IB was to incorporate a highly digital avionics suite including a phased array radar and an arsenal of precision-guided weapons.

A prototype T-10V-1 flew in April 1990 before the Soviet Union itself collapsed in December 1991. While the collapse of the Soviet Union slowed developmental work on the Su-27IB—which was designated as the Su-32 during much of the 1990s—continued at a reduced pace. But eventually, as the post-Soviet Russian Federation emerged from the chaos and economic meltdown of the 1990s, Moscow did complete the development of what the Russian Air Force designated as the Su-34.

The Russian Air Force ordered five pre-production jets in 2005, but started ordering more aircraft beginning in 2008. Thus far, the Russian Air Force has ordered 114 Su-34s and the Kremlin has promised to further modernize the bomber—which ensures that the powerful jet will remain in service for decades to come. One of the reasons that Moscow can retain the new bomber indefinitely is because of the jets’ advanced open-architecture avionics design—which is one of the key differences between the current Su-34 and its Su-27IB progenitor.

The Su-34 will likely remain in service with the Russian Air Force for decades to come as a partial replacement for the Su-24 and the Tupolev Tu-22M3 Backfire bomber. The Russians expect to add new computers, sensors and electronic warfare systems to the Su-34 that would make the jet even more formidable. Among the improvements is that addition of a new electro-optical infrared targeting pod—which would start to address one of the major weakness of the Russian Air Force.

Other improvements include the addition of a new Spear-DL rear-ward facing radar which would warn the pilots that missiles are approaching—it would be combined with a system to automatically deploy countermeasures and jamming. But while the Su-34 already has a potent jamming suite in its wing-tip mounted Khibiny pods, the Russians are installing an even more potent system onto the Fullback, which would enable the Su-34 to act as airborne electronic warfare platform comparable to the Boeing EA-18G Growler.

Nonetheless, while Russian brag about their very capable electronic warfare systems, the Su-34 carries a host of long-range air launched anti-ship and land attack cruise missiles. The Russians seem well aware that manned aircraft would incur heavy losses in a high-end fight against modern air defenses, and thus are investing in standoff capability. Thus, the Su-34 poses a serious threat to targets all over the North Atlantic and Europe.