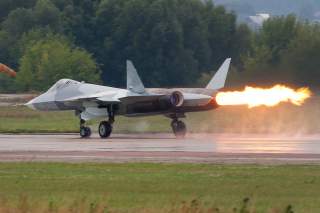 To protect its vast airspace, Russia relies on the powerful, long range and speedy Mikoyan MiG-31 Foxhound. But while Moscow continues to upgrade the venerable Mach 2.83-capable interceptor, the jets have not been produced since 1994.

While Russia’s current fleet of MiG-31s will likely be able to serve into the 2030s, the Kremlin will eventually have to develop a replacement. Indeed, the Kremlin has funded some preliminary work on developing a successor to the venerable Foxhound that is tentatively being called the MiG-41.

“There are some discussions and initial research about development of a MiG-31 successor - but it is at the very early stages,” Russian defense analyst Vasily Kashin at Moscow's Higher School of Economics (HSE) told The National Interest.

The MiG-41 would be a completely separate development from Russia’s fifth-generation Sukhoi T-50 PAK-FA air superiority fighter. The potential new interceptor would be more of a so-called sixth-generation effort similar in concept to the U.S. Air Force’s Penetrating Counter Air or the U.S. Navy’s F/A-XX or Next Generation Air Dominance programs.

“As I understand, the MiG-41 is a kind of a futuristic project which is still on the stage of conceptual design,” Kashin said. “I think that it is something like a 5++ or 6th Gen project. So, we probably should consider it as having the same status as the American, Chinese and European 6th Gen projects—something futuristic, which, at best will be deployed by 2035-40.”

Because the MiG-41 would be developed well after work on the PAK-FA is complete, the new interceptor would not compete for resources with Sukhoi’s program. “I think there is no conflict, because even if it ever reaches the test flying stage, it can be no earlier than some time around the mid-2020s,” Kashin said.

Others expressed skepticism as to whether Russia has the resources to develop such an aircraft. “I think it's still very much a paper project under the slogan ‘if we draw it, then maybe we'll get money for it,’” a defense industry source told The National Interest.

Russia needs a long-range interceptor to replace the MiG-31 because of its large territory. Post-Soviet Russia—even shorn of many of its former territories—covers a vast landmass with bases that are often few and far between. “Russia needs a long range interceptor because of its geography, so keeping the MiG-31 as long as possible and then making a replacement for them is a good idea,” Kashin said.

Only time will tell if the MiG-41 is eventually built. Certainly, the Kremlin has the ambition and the need to develop such an aircraft. It’s question of if Russia has the resources to bring such an ambitious project to fruition.