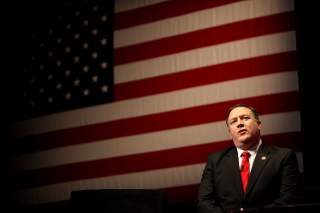 The Director of the Central Intelligence Agency, Mike Pompeo, is denouncing WikiLeaks as a hostile non-state foreign intelligence agency that is trying to harm American interests. Speaking publicly for the first time since assuming his duties as the head of America’s premier intelligence agency, Pompeo angrily called out the group for actively collaborating with the Kremlin’s Main Intelligence Directorate of the General Staff—better known by its Russian acronym GRU.

“It is time to call out WikiLeaks for what it really is—a non-state hostile intelligence service often abetted by state actors like Russia,” Pompeo told a standing-room only audience at the Center for Strategic and International Studies in Washington, D.C. “In January of this year, our Intelligence Community determined that Russian military intelligence—the GRU—had used WikiLeaks to release data of U.S. victims that the GRU had obtained through cyber operations against the Democratic National Committee. And the report also found that Russia’s primary propaganda outlet, RT, has actively collaborated with WikiLeaks.”

Pompeo also took aim at Julian Assange—director and editor-in-chief of  WikiLeaks—personally. In Pompeo’s view, while Assange likes to characterize himself as titan of privacy rights and free speech, he is nothing of the sort. “I am quite confident that had Assange been around in the 1930s and 40s and 50s, he would have found himself on the wrong side of history,” Pompeo said. “We know this because Assange and his ilk make common cause with dictators today. Yes, they try unsuccessfully to cloak themselves and their actions in the language of liberty and privacy; in reality, however, they champion nothing but their own celebrity. Their currency is clickbait; their moral compass, nonexistent. Their mission: personal self-aggrandizement through the destruction of Western values.”

Indeed, Assange has found admirers within the ranks of Islamic extremist groups, Pompeo said. “His actions have attracted a devoted following among some of our most determined enemies,” Pompeo said. “Following a recent WikiLeaks disclosure, an al Qa’ida in the Arabian Peninsula member posted a comment online thanking WikiLeaks for providing a means to fight America in a way that AQAP had not previously envisioned. AQAP represents one of the most serious terrorist threats to our country and the world.”

To counter the threat from WikiLeaks and those who leak America’s most valuable national security secrets—like former intelligence contractor Edward Snowden and Chelsea Manning—the U.S. intelligence community will have to go after groups like WikiLeaks. “While there is no quick fix—no foolproof cure—there are steps that we can take to undercut the danger,” Pompeo said. “First, it is high time we called out those who grant a platform to these leakers and so-called transparency activists. We know the danger that Assange and his not-so-merry band of brothers pose to democracies around the world. Ignorance or misplaced idealism is no longer an acceptable excuse for lionizing these demons.”

Additionally, the United States will have to take measures to toughen up its counterintelligence capabilities. “We’ve got to strengthen our own systems; we’ve got to improve internal mechanisms that help us in our counterintelligence mission,” Pompeo said. “All of us in the Intelligence Community had a wake-up call after Snowden’s treachery. Unfortunately, the threat has not abated.”

Ultimately, there is no way to completely defeat the insider threat or completely prevent foreign intelligence agencies from infiltrating America’s security apparatus.

“We can never truly eliminate the threat but we can mitigate and manage it. This relies on agility and on dynamic ‘defense in depth,’” Pompeo said.