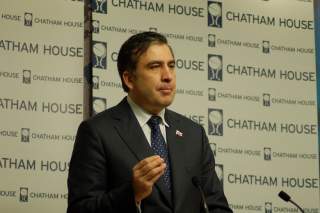 One of the more enduring and resilient neoconservative myths--what the sociologist Karl Jaspers would have recognized as a “life sustaining lie”--is the notion that Russian President Vladimir Putin was entirely to blame for the outbreak of hostilities between Russia and Georgia on August 7, 2008. As the story goes, Mr. Putin, an aggressive geopolitical revanchist, went to war against his tiny southern neighbor that summer using a similar pretext that he is said to be using now is Ukraine - to protect Russian nationals outside of Russia’s borders – in order to prevent Georgia from launching on its predestined trajectory West.

No less a personage than former Georgian President turned Tuft’s University “Senior Statesman” Mikheil Saakashvili is a frequent proponent of this view. In a recent op-ed in the New York Times, the former president expressed his continuing puzzlement as to why Russia invaded Georgia:

When Russia was bidding to be host of the Olympics, it had enthusiastic Georgian support, as we believed holding the Games in Sochi would enhance chances for peace and improve relations. Instead, several months after the Kremlin won its bid to host the Olympics, Russia invaded Georgia.

Now Misha, as he is commonly known, is back in the headlines. This time it is not as an object of the adulation he no doubt believes is his due, but rather as the subject of criminal charges that have been filed against him by Georgia’s general prosecutor for the “violent dispersal of demonstrators” in November 2007 as well as for attempting to seize an independent television station, Imedi.

These charges have caused a good amount of consternation among his Washington fan base. Senators John McCain and Ben Cardin, along with two Senators, Jeanne Shaheen and Jim Risch, neither previously noted for their expertise in Caucasian affairs, released a statement decrying the charges as politically motivated. The Senators began by conceding that “President Saakashvili and his government were not faultless…”

That is only too true. Leaving aside that during the brief 2008 conflict, both Human Rights Watch and Amnesty International documented numerous cases of Georgian forces targeting civilians and using cluster bombs in violation of international law; subsequently, evidence surfaced that Saakashvili and his government imprisoned and tortured political prisoners as a matter of course during his years in office. Even as recently as the 2012 Georgian elections, State Department veteran John Kornblum noted the “ruthless oppression of freedom and violence against [opposition] campaign workers.”

Undeterred, the Senators continued their unasked-for lecture to the Prosecutor General:

…the pursuit of justice should not become a tool of political retribution…We and others have urged Prime Minister Garibashvili and other Georgian leaders to focus on the future, not the past and to help move their country forward, not take it backward.

In other words: hands off Misha.

The reaction in Kutaisi to the Senator’s statement was swift. Tedo Japaridze, chairman of the parliament’s foreign relations committee, struck back in statement released yesterday, noting that:

In line with the principle of the autonomy of justice, I will refrain from commenting on the substance of the case made by the Chief Prosecutor’s Office. The very same principle should also constrain our friends in the US Senate.

Democratic consolidation, ultimately, requires confidence in due process, that is, a deep conviction that no one is above or beyond the law.

This is an important point. Indeed, the irony is that McCain is a champion of promoting democracy abroad. Yet when it suits his purposes he apparently thinks that justice--the foundation, after all, of any democracy--should be jettisoned to protect his foreign friend. Not surprisingly, the Georgian government is taking a different view. Another irony is that Russia is currently moving toward imposing sanctions on Georgia to retaliate for its embrace of the European Union. McCain and Co. appear to be inadvertently finding themselves in bed with Putin when it comes to hectoring Georgia.

For too long Saakashvili’s friends on Capitol Hill have – with great success – managed to obscure their champion’s true record, which is one of abject criminality reflecting the predilections of a rather debased personality. The lesson policymakers should (but of course will not) take away from their decade long infatuation with Misha is that unstinting and unquestioning support for anti-Russian proxies and client states – even when they claim, like Saakashvili, to be honest-to-goodness democrats – is a recipe for trouble and all too often results in the further degradation of America’s reputation abroad.