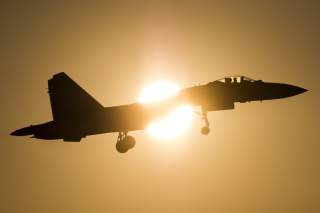 While the Sukhoi Su-27 Flanker series was originally developed in the Soviet Union to counter the American F-15 Eagle air superiority fighter, the design has evolved beyond what its designers might have imagined. Variations of the Flanker are not just built in Russia; China has its own knock-offs.

Russia produces myriad variations of the Flanker that range from the relatively basic Su-30M2 to the top-of-the-line Su-35S Flanker-E. But moreover, there are a host of Chinese-made copies of the Flanker. And China continues to tinker with the design to develop ever more advanced and creative variations of the original Soviet design. Most of these Chinese knock-offs are unlicensed derivatives that Beijing reverse engineered and modified from the original Russian hardware. Indeed, it’s not beyond the realm of possibility that Chinese and Russian derivatives of the Flanker will be fighting over sales in the coming years. One can easily imagine a scenario where Sukhoi’s Su-35 goes head-to-head with the J-11D in a future export battle.

But the Chinese are catching up—they’ve gone beyond just reverse engineering and have started to branch off into original works of their own. Indeed, a senior U.S. industry official once told me that the Chinese are starting to embark on an aerospace “renaissance.” The main problem for the Chinese is that they are woefully behind on engine technology. While Chinese engineers are able to build working engines in the lab, they are not able to build reliable production jet engines. It remains their single biggest Achilles’ Heel.

While the Chinese are almost certainly catching up on aircraft avionics and sensors, it is not clear how capable their systems are. It is evident that the Chinese are developing passive electronically scanned array radar and active electronically scanned array radars, but how close those systems are to “prime time” is not clear. Similarly, the Chinese are developing their own electronic warfare systems, infrared search and track and electro-optical targeting systems. But there is very little data on how those systems might perform in the real world—even if the brochures are impressive. Given that the Chinese are relative novices at building indigenous combat aircraft and their subsystems, it is highly likely that most of the original Russian-built Flanker variants are still superior to Beijing’s knock-offs.

Nonetheless, Beijing’s aerospace industry has produced an impressive array of Flanker clones. In addition to the original J-11, J-11A and the indigenized J-11B—China is working on advanced derivatives including the J-11BS, J-11D and the J-16 strike fighter. The Chinese have also developed the J-15 carrier-variant from a prototype of the Su-33 Flanker. The three most capable Chinese Flankers are the J-15, J-11D and J-16.  The J-11D is in many respects the Chinese equivalent of the Su-35—but it is overall less capable with inferior maneuverability and inferior avionics and powerplant. But it’s probably cheaper—and might be an attractive export product if the Chinese could craft operationally useable engines. But that’s still a ways off.

China will eventually be able to compete with and even one day surpass Russia in the military aviation industry. The Chinese have a lot of money and they are willing to spend it on developing their capabilities. The Chinese are also more than willing to steal any technology that they don’t already possess—and that helps save development time and money. Moreover, now that they have more or less picked Russia clean of any useful technological innovations, Beijing is focusing on raiding the U.S. defense-aerospace sector for American technical knowhow.

But ultimately, China is clearly hamstrung by a lack of indigenous innovation and horrendously bad quality controls—one of the many reason Beijing continues to fail in it is efforts to build a working jet engine. Until Beijing perfects jet engines, its aerospace industry will not be able secure customers independent of Russia.