Mischief and FON in the South China Sea 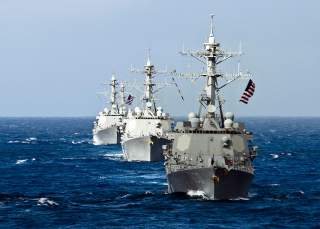 The U.S. Navy has conducted its first freedom of navigation operation (FONOP) under the Trump administration. Conducted near Mischief Reef in the Spratly Islands, the FONOP is one of the first concrete, proactive policy actions the White House has taken in the Asia-Pacific theater. While attaching too much meaning to a single FONOP is unwise, this hopefully signals that the Trump administration is taking lessons learned from the Rebalance and will begin to instill some continuity in U.S. Asia policy.

Lessons Learned from the Rebalance:

This week’s FONOP appears to build on the successful strategies and policy actions of the Obama administration while also learning from the valid criticisms of their “Rebalance” policy. The Pentagon conducted the FONOP with little fanfare, has not issued any statements, and seems to have no plans to do so, instead planning on detailing the operation in its FY17 Freedom of Navigation report published next year. Such operation should be routine as their power lies in their mundaneness. Deciding to exercise a high seas freedoms FONOP casually dismisses China’s spurious claims that contesting them formally and confronting them directly are not needed.

The United States has a long history of conducting FONOPs globally, with the U.S. Freedom of Navigation program being executed in adherence with the maritime strictures included in the United Nations Convention on the Law of the Sea (UNCLOS). Fundamentally, these operations are legal tools to challenge maritime claims, not escalatory military tactics in lieu of diplomacy.

The U.S. Navy can conduct FONOPs in various ways to contest different types of maritime claims. Two types of FONOPs the Navy conducted under the Obama administration are those that exercise “high seas” freedoms and ones that conduct “innocent passage.” FONOPs which practice high seas freedoms do not recognize maritime claims, instead treating waters as international commons and thereby allowing navies to exercise maneuvering drills within them. For innocent passage FONOPs, navies travel directly through disputed waters without engaging in maneuvers or operations; they are not inconsistent with a country’s maritime claim assertions but also do not concede U.S. recognition of such claims. Similar to the last FONOP of the Obama administration around the Paracel Islands in October 2016, and the first conducted after the Permanent Court of Arbitration’s ruling, the Mischief Reef FONOP exercised high seas freedoms with its man overboard drill.

The choosing of Mischief Reef was wise. Unlike the Paracels, which are de facto under China’s uncontested control, the Spratlys (of which Mischief Reef is a part) are contested by several claimant states (despite Beijing’s best efforts, including constructing airfields and installing radar and missile defense systems). Despite China’s proclamations that the build-up is for civilian purposes, these military installations can be used to deny other nations access to the area and push China’s power projection into the western Pacific. More specifically in regards to Mischief Reef, the PCA ruled the mid-ocean feature a “low-tide elevation,” and consequently generates no entitlement to maritime zones on its own. Mischief Reef is, legally, “part of the exclusive economic zone and continental shelf of the Philippines” and affords China no additional maritime claims. By conducting a FONOP around Mischief Reef, it shows that the Trump administration honors the PCA’s ruling and will continue to uphold international norms and values like rule of law, similar to the credos of the Obama administration.

New Lessons for the Trump Administration:

The FONOP hopefully signals that the Trump administration will challenge problematic Chinese behavior and actions and resist temptations to use those claims as leverage to “make a deal.” If these FONOPs continue, it may reassure experts who caution against the administration overly “transactionalizing” the U.S.-China relationship or seeking closer ties to President Xi Jinping at the expense of long-term U.S. interests and regional concerns. Separating the South China Sea issue from other issue sets (and refraining from using the South China Sea as a bargaining chip elsewhere) is a step in the right direction.

Moreover, the timing of the FONOP is significant. Coming a week before the Shangri-La Dialogue, which Secretary Mattis is attending, the FONOP is an important reminder of enduring American commitment to the region. Given President Trump’s rhetoric on the campaign trail questioning the utility of alliances and his “America First” foreign policy, many Southeast Asian countries worried the United States would no longer counter Chinese assertiveness in the region. Although politically subtle, this especially unambiguous FONOP seems to indicate a broader, ongoing trend of American engagement.

That said, one FONOP does not a strategy make. Understanding the vital importance of continued U.S. presence and engagement in Asia, the complex bilateral relationship between the United States and China, and the impact on national security are critical to formulating effective defense policy. Though it is far from clear that the current administration realizes and fully fathoms the enormity of these issues, the restrained yet unequivocal nature of the FONOP hopefully signals that the Trump administration is starting to grasp the importance of policy, not just bluster.

Hannah Suh is the Program Manager for the Asia-Pacific Security Program at the Center for a New American Security (CNAS).