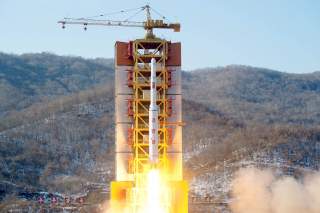 As North Korea speeds towards acquiring nuclear weapons and the means to delivery them against U.S. cities, Washington is scrambling to find ways to deal with the emerging threat. One potential response that is quietly gaining greater support is boost-phase missile defense.

America’s missile defense systems are currently limited to ones that intercept missiles during the midcourse (when the missile is coasting in outer space) and terminal phase (once it has entered back into the atmosphere). The former is provided by the ground-based midcourse defense (GMD) system, which is the only system designed to protect the U.S. homeland from ICBMs. By the end of 2017, Washington expects to deploy forty-four GMD intercepts. Forty of these will be in Alaska with the remaining others in California. In addition, the United States currently has a number of terminal phase missile defense systems such as the Patriot-3, Aegis Ballistic Missile Defense (BMD) and Terminal High Altitude Area Defense (THAAD). These terminal systems are only intended to deal with short and medium-range threats.

The issue with having only the GMD system defending against North Korea’s ICBMs is that the system has not been very effective. Moreover, even if the system could be improved, there will always be inherent difficulties in targeting missiles during this phase of their trajectory. These include the fact that the missiles will be far away from the interceptors, they will have already lost their propulsion system (which makes them smaller targets) and they can deploy decoys that greatly complicate the interceptors’ mission.

These issues do not exist for boost-phase missile defense. As the Missile Defense Agency has noted: “Intercepting a missile in its boost phase is the ideal solution for a ballistic missile defense, since destroying a missile during this phase of its flight precludes the deployment of any countermeasures, and also prevents the missile warhead from attaining the velocity necessary to read its intended target.” Lt. Samuel S. Lacinski expands on this in the latest issue of Proceedings magazine: “A boosting ballistic missile presents a large target with a bright signature, making detection and engagement easier. Since countermeasures generally are not deployed during the boost phase, the missile presents a single target for engagement.” Lacinski also notes that boost phase could help change the cost equation that plagues missile defense: namely, offensive missile systems are far cheaper than the defensive systems that counter them. As he writes: “A smaller interceptor with a less complex kill vehicle suitable for boost-phase intercept (BPI) could move missile defenses to the right side of the cost curve. Smaller and cheaper boost-phase interceptors also would allow for higher production rates, further driving down costs.”

Still, boost-phase missile defense has its own drawbacks. In fact, the Missile Defense Agency, despite calling it the ideal solution, argues that boost phase “is the most difficult phase in which to engage a missile.” The greatest challenge is that a missile is only in boost phase for one to five minutes at the beginning of the flight. This requires sensors that are quickly able to detect a missile launch and relay targeting information, as well as extremely fast interceptors positioned close to the target.

Despite these challenges, there seems to be growing support for investing in boost-phase missile defense to deal with North Korea. For instance, Senator Ted Cruz (R-TX) has called for fielding a space-based interceptor (SBI) program, writing in the Washington Post recently, “Only with a serious space-based capability can we target missiles in their boost phase and maximize discrimination of decoys during midcourse flight.” The House of Representative version of the 2018 National Defense Authorization Act (NDAA) reportedly requires the Pentagon to start developing just such a capability, and the NDAA that was approved by the Senate Armed Services Committee also included a provision about space-based missile defense. Such a capability would be prohibitively expensive, however, with the National Academy of Sciences estimating it could cost $300 billion. It’s also unclear how long such a system would take to deploy.

A potentially cheaper option, which would be available much more quickly, is to use unmanned aerial vehicles (UAVs) for boost-phase defense. As I noted back in June, the Missile Defense Agency recently published a request for information (RFI) asking for proposals for a High Altitude Long Endurance (HALE) unmanned aircraft equipped with lasers to destroy ballistic missiles during their boost phase. Although lasers hold great promise for missile defense in the future, a more near-term option would be to equip UAVs with kinetic intercepts. The technology for such a system is basically already available. In his article mentioned above, Lacinski points to a recent MIT simulation that demonstrated the feasibility of using the MQ-9 Reaper drone as a boost-phase intercept (BPI). In the simulation, the drone relied on the infrared Multi-Spectral Targeting System (MTS-C) sensor to track the missile. As he noted, the MDA has already tested an integrated MQ-9 Reaper and MTS-C to track missiles from boost phase to mid-course. During the simulation, two UAVs with MTS-C tracked the missile while a third equipped with interceptors destroyed it. The MIT analysis found this system was effective for ICBMs and Intermediate-Range Ballistic Missiles (IRBMs), but less so against medium-range ballistic missiles that have shorter burnup times.

Although this system holds promise from a technical standpoint, it could pose significant political problems. Most importantly, a system deployed close enough to be effective against North Korea would inevitably also be useful against some of China and perhaps Russia’s missiles. The United States would therefore face fierce backlash against Beijing if it fielded such a system. Then again, this would be another way for the Trump administration to turn up the pressure on China, which seems to be the current strategy. Thus, China’s opposition could be a selling point for the White House.

Image: A North Korean long-range rocket is launched into the air at the Sohae rocket launch site, North Korea, in this photo released by Kyodo February 7, 2016. Mandatory credit REUTERS/Kyodo/File Photo