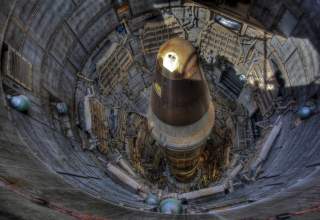 A recent CBO report takes on the commonly-heard myths of nuclear modernization in the United States.

The Congressional Budget Office gave nuclear modernization supporters a Halloween “treat” by releasing their much-anticipated report on the 30-year costs of the U.S. nuclear arsenal yesterday. The report is the first of its kind by the government which documents the anticipated costs of the entire nuclear arsenal – delivery systems, command and control, warheads, etc. – for the entire period of modernization 2017-2046.

The findings of the report are important for a couple of reasons. First, the Trump administration is in the final stretch producing its Nuclear Posture Review, (NPR) which informs nuclear weapons policy decisions for years to come.

The NPR, due by the end of the year, will most likely detail the purposes and goals for U.S. nuclear forces which are organized by the triad of submarines, land-based missiles, and bombers (plus dual-capable aircraft). How much the U.S. government values nuclear weapons within its overall defense strategy, in turn, determines how much it is willing to spend on these weapons. That is where the CBO report comes in.

We already have some indications that the Trump administration has thought about, and agreed on, the need for investing in the U.S. nuclear arsenal. In fact, in Secretary of Defense Mattis’ words, it is “the number one priority of the Department of Defense.”

In D.C., it is one thing to say something is a priority, but something else entirely to put your money where your mouth is and fund it. Here too, the Trump administration’s position is clear. General Paul Selva, Vice Chairman of the Joint Chiefs of Staff, recently stated, “Perhaps the clearest indicator of this prioritization is how we have chosen to spend our resources and the tradeoffs we have been willing to accept… we are emphasizing the nuclear mission over other modernization programs when faced with that choice.”

In addition, CBO states, “In percentage terms, the total cost of nuclear forces would represent about 6 percent of all spending on national defense over the 2017–2046 period, in CBO’s estimation, if DoD implemented its 2017 plan for defense. On an annual basis, that percentage would vary substantially, rising from about 5.5 percent in 2017 to a peak of around 8 percent in the late 2020s and early 2030s before declining to about 4.5 percent in the 2040s.”

It should be noted that in the 2040s, the United States will be spending less on nuclear weapons than it is currently, and that would likely remain the case for decades afterward. Since modernization is happening all at once and the weapon systems last for decades, some into the 2080s, the United States would most likely coast on a flat spending trajectory after the 2040s, much like what happened in the 1990s and 2000s after the Reagan buildup.

Despite the scary-sounding “t-word,” $1.2 trillion spread out over 30 years is quite affordable and looks especially so when one considers that the U.S. will spend $16 trillion or more in that same period. In the words of Mattis, “America can afford survival.”

The second important effect of this report, beyond informing decision-makers in the Pentagon and the White House, is that it will inject new life into the national debate on nuclear weapon costs which has grown stale with exaggerations and head-in-the-sand attitudes.

The commonly-heard myths that this report takes head-on (and subsequently destroys) are numerous.

As seen above, cutting the size of a small piece of the defense budget will not, and cannot, result in big savings. CBO reviewed some of these “minimum deterrence” plans such as a reduced triad, or even a dyad, and found the fiscal “savings” of these plans were between 2% and 11% of the modernization total. The report states, “the percentage reduction in overall costs would be limited because no single segment of the strategic nuclear triad (SSBNs, ICBMs, and bombers) would represent more than 25 percent of the total costs. Moreover, there are substantial fixed costs involved in maintaining the capability to safely and reliably field nuclear weapons.”

There are just so many fixed costs associated with nuclear weapons that cutting modernization programs, even substantially, will save very little money while not even accounting for the obvious risks to deterrence, assurance, damage limitation, and nonproliferation.

CBO’s bottom line number says it all, an average of $40 billion per year spread across two departments over 30 years is affordable. It is all the more so when, as Gen. Selva describes, the U.S. government prioritizes its nuclear systems over its conventional systems.

The concept of “affordability” is more than just dollars and cents, it is the priority placed on the programs. Technically I could “afford” a swimming pool if I emptied my bank and retirement accounts, but since it is not high on my list of priorities, I cannot actually afford it.

Since the United States values the deterrence and assurance effects of nuclear weapons very highly, among other positive attributes, it can afford the cost of maintaining these weapons.

As shown above, the savings that would result from cutting nuclear programs is minimal, but a myth still persists that savings from nuclear cuts could fund conventional weapon programs that “need” it more.

This is flatly contradicted by military officials who do not even have nuclear systems under their command but who use the nuclear deterrent as the “bedrock” for their missions. As U.S. Army Chief of Staff Gen. Mark A. Milley testified in Congress recently, “It is not even an Army system. It needs to be overhauled and brought back up to its level of readiness.”

In addition, conventional forces generally cost much more to sustain that nuclear forces, a point rarely mentioned by nuclear disarmament advocates. CBO states that it costs approximately $2.6 billion per year to maintain an active-component armored brigade combat team. In contrast, it costs $170 million per year to operate one nuclear ballistic missile submarine. While nuclear weapons are not inexpensive, they are certainly affordable when compared to their conventional counterparts.

Lastly, CBO is actually overestimating the costs of nuclear forces by counting 100% of the bomber costs towards the nuclear mission, when in reality, the costs of making a bomber nuclear-capable are conservatively estimated by independent analysts at 10% (or 25% according to CBO). Acknowledging this, CBO estimates $139 billion could more accurately be subtracted from the total of $1.2 trillion, making the real total approximately $1.1 trillion.

Unfortunately, these myths, like the zombies of Halloween, will inevitably rise again since the undead are nothing if not persistent. Thankfully this CBO report should clear the field, at least for now, and dispel the “tricks” of nuclear disarmament advocates.

Matthew R. Costlow is an analyst at the National Institute for Public Policy and a Ph.D. student at George Mason University.