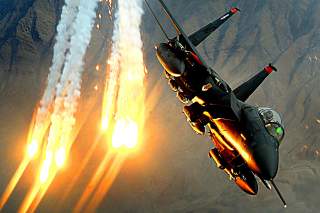 Last week, a Boeing F-15E Strike Eagle belonging to the United States Air Force shot down what appears to have been an Iranian-made Shahed-129 unmanned aerial vehicle that was threatening American-backed rebel forces in Syria.

The drone—operated by pro-Syrian regime forces—attacked targets near where coalition troops were stationed with bombs before being dispatched by the Strike Eagle according to U.S. Central Command (CENTCOM).

“The pro-regime UAV, similar in size to a U.S. MQ-1 Predator, was shot down by a U.S. aircraft after it dropped one of several weapons it was carrying near a position occupied by Coalition personnel who are training and advising partner ground forces in the fight against ISIS,” reads a CENTCOM statement from June 8.

“The drone that was used in the attempted attack on U.S. forces or coalition forces was a MQ1-like Predator -- or not Predator it was like that kind of, a UAV.  It was armed and still had weapons on it when it was fired upon by U.S. forces from an aircraft,” Col. Ryan Dillon, Combined Joint Task Force-Operation Inherent Resolve spokesman told reporters at the Pentagon on the same day.

“The drone did fire on the coalition forces that were operating and conducting a patrol to the east, outside of the deconfliction zone, doing patrols with our partner forces, as we have done for many months now.”

However, while the Pentagon is willing to say that coalition forces—roughly platoon strength—were fired upon, it does not want to say what kind of weapon the enemy used.

“I can't classify to say whether it was a missile, but I will say that it did not have effects that cause any casualties whatsoever to the forces that we have on the ground,” Dillon said.

Indeed, the Pentagon has been tight lipped about the entire incident—refusing to definitely state if the Air Force aircraft that engaged the drone was an F-15E or what kind of weapon it used to engage the enemy drone.

However, it has been widely reported that the U.S. Air Force aircraft in question was a Strike Eagle—a dual-role air-to-ground version of the venerable F-15 air superiority fighter. The F-15E—which retains most of the air-to-air capabilities of the F-15C air superiority fighter is armed with the Raytheon AIM-9M and AIM-120 AMRAAM missile—and a 20mm cannon.

The Strike Eagle likely engaged the drone with either an AIM-9 Sidewinder or an AIM-120. The AIM-9X costs roughly $400,000 per missile while the latest AIM-120D costs roughly $1 million per shot. It is not clear how much a Shahed-129 drone costs, but an American General Atomics MQ-1 Predator is worth roughly $4 million per aircraft. It is very likely that the Iranian machine—which is likely far less sophisticated in terms of sensors and data-links—is far cheaper.

In any case, the cost-exchange ratio is not particularly favorable for the United States—especially if the Air Force used the an expensive weapon such as the AMRAAM to take down the Iranian drone. The United States must figure out a way to eliminate such threats without breaking the bank. Using a ballpark $1.2 million missile to shoot down an $500,000 enemy aircraft is just plain foolish in the long run.