Moscow and Beijing: A Growing Partnership? 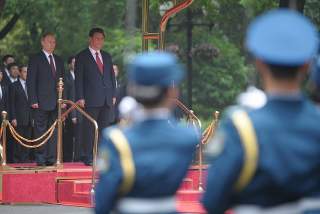 After a decade of wrangling, China and Russia have signed a landmark energy deal, worth $400 billion: beginning in 2018, Russia will supply China with 38 billion cubic meters of natural gas annually for three decades.  Importantly, though, the final unit price remains a mystery.  European countries pay a higher unit price for Russian gas than China pays for Central Asian gas.

China seems to be in a position of strength when it comes to price.  The IMF forecasts that Russia’s economy will suffer $100 billion in capital outflows this year and grow by just 0.2%.  Russia was already more dependent on Chinese largesse than China was dependent on Russian gas prior to this year’s events; its heightened economic vulnerability only compounds that asymmetry.  As Ely Ratner and Elizabeth Rosenberg of the Center for a New American Security explained recently,

“Unlike Moscow, Beijing has options….Gazprom will have to move quickly to lock in the infrastructure and financing commitments necessary for the Siberian pipeline project.  Otherwise it risks being beaten to the Asian market by alternative suppliers in Central and Southeast Asia…or by suppliers from North America, Australia, and East Africa that are working furiously to build gas liquefaction and export facilities.”

Also of note is that China’s economic influence has surpassed Russia’s in most of Central Asia.  Meanwhile, migrant Chinese laborers continue to pour into Russia’s sparsely populated Far East, underscoring Moscow's poor demographic outlook: according to the American Enterprise Institute’s Nicholas Eberstadt, Russia without its “historically Muslim areas” and “heavily tribal regions” “remains a net-mortality society,” and according to the government’s own calculations, its population is “set to shrink by almost 20% from one generation to the next” without immigration.

Isolated from the West and struggling at home, Russia seeks to boost its relationship with China—both to shore up its own economy and certify its great-power credentials.  At the same time, though, it does not want to be reduced to an economic adjunct of Chinese foreign policy; like most of China’s neighbors, moreover, it seeks to hedge against China’s ascent in and beyond the Asia-Pacific region.

Russia’s predicament in the Orient is only one part of a challenging strategic outlook that it faces globally.  The use of the word “strategic” here is deliberate: most of the victories that Russia has achieved in recent years have been tactical. In hiving off Abkhazia and South Ossetia from Georgia in August 2008, annexing Crimea this March, and, most recently, working to hive off two provinces from eastern Ukraine (Donetsk and Luhansk), Vladimir Putin and his top officials have displayed an impressive ability to notch incremental territorial gains without triggering an overwhelming response.

But a prudent strategy figures out how to use power resources to achieve operational objectives.  Putin has often stated that he seeks to achieve “Eurasian integration,” which would allow “the post-Soviet space to become an independent center of global development, rather than the outskirts of Europe and Asia.”  But Russian revanchism—especially manifest in its incursion into Crimea—has alienated much of Europe, given NATO a new lease on life, and resulted in further hardship for the country’s economy: that effort, in short, has made it far more difficult for Russia to achieve the objective that Putin has articulated.

The bottom line: Russia’s demographic and economic outlooks are poor.  An already suspicious West has grown further hostile.  And while Russia’s cooperation with the Eastern Hemisphere’s preeminent power may have “reached the highest level in all its centuries-long history” (Putin’s assessment), Sino-Russian relations continue to grow more asymmetric.  Reviving Russia amid such constraints will be a daunting undertaking.

Ali Wyne is a contributing analyst at Wikistrat and a coauthor of Lee Kuan Yew: The Grand Master’s Insights on China, the United States, and the World (2013).

Image: Office of the President of Russia.