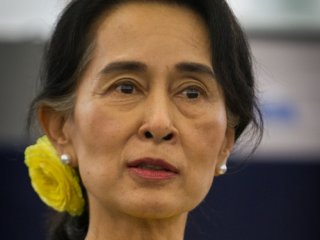 In July 1990, weeks after Aung San Suu Kyi's National League for Democracy (NLD) won elections held at the end of May of that year, party spokesman Colonel Kyi Maung was asked whether the junta should be concerned that the NLD would take its revenge on the military brass once it came to power.

In an interview with Asiaweek magazine, he replied, “I can only say there are so many problems which we must address.” Then, coyly, he added: “In actual fact, how many Germans stood trial at Nuremberg?”

The interviewer shot back, “Are you saying there will be a Nuremberg in Rangoon?”

“No, not at all,” said Kyi Maung. Then, referring to the junta's powerful head of military intelligence, he added: “Of course, people [such as] Khin Nyunt might reasonably feel themselves pretty insecure.”

NLD officials later came to believe that the specter of such trials had been decisive in persuading junta officials not to recognize the election results, despite significant domestic and international pressure.

Today, as twenty-five years ago, the military and the NLD find themselves negotiating the meaning of the latter's electoral victory and the nature of the military's ongoing role in politics.

In 1990, the primary question was whether the winners would be seated as a constituent assembly tasked with drafting a new constitution while the military continued to rule, or as members of a parliament with the power to form a government. When the military did not get its way, it ignored the May election results and jailed many of its opponents.

Today, the question is whether the constitutional arrangements (which the military drew up in the years since it ignored the 1990 election results) should be adjusted to better reflect the landslide victory that the NLD won in November, and whether to roll back or further extend some of the prerogatives that document bestows upon the military.

For her part, Aung San Suu Kyi, rather than hinting at a ‘Nuremberg in Rangoon,’ has promised a “government of national reconciliation” that would include not just her allies in the ethnic parties, but also at least one member of the military-backed Union Solidarity and Development Party (USDP). She has indicated that there will be no investigations into the actions of the outgoing regime, or threats to their business interests.

Haunted by the consequences of Kyi Maung's words, Aung San Suu Kyi has also exercised much tighter control over the party and its message than she did in 1990, when she was under house arrest. The Lady, as she is often called in Myanmar, passed over many independent-minded, popular and media-friendly party members when selecting the NLD's parliamentary candidates last August, and has since ordered NLD cadres not to speak to the press about the party's transition plans.

For the most part, party members have complied. But on January 19, the party's current spokesman, Nyan Win, released to the press a list of NLD candidates for leadership roles in the incoming parliament. The next day, the party rebuked Nyan Win, stating that from here on out, Aung San Suu Kyi alone would speak for the party on the transition and matters of party policy.

One incoming NLD member of parliament with whom I was speaking last month would occasionally stray into sensitive territory regarding the NLD's plans. But when I pressed him on critical questions, he would smile tightly, clasp his hands, and glance at his phone emblazoned with a background image of the Lady.

All this has left Myanmar particularly tense as several key constitutional milestones approach. Today, the new parliament will sit for the first time to elect its leadership. Next week, it will begin the process of electing the next president and vice presidents. And on March 31, Thein Sein and his Cabinet will leave office, handing power to the president chosen by the new parliament.

Few people in Myanmar think that the military will seek to prevent a transfer of power along the lines prescribed in the constitution, a document they wrote to protect their interests even in the event of an NLD landslide like the one that occurred in November. But no one in the NLD wants to say anything that would either give the military cause to reconsider or, perhaps more critically, that would attract the ire of their leader.

Aaron L. Connelly is a Research Fellow in the East Asia Program at the Lowy Institute for International Policy, where he focuses on Southeast Asia, particularly Indonesia and Myanmar, and the U.S. role in the region. This article first appeared in the Interpreter.