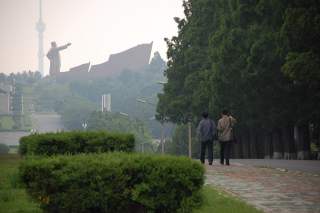 Pyongyang accused the Central Intelligence Agency and South Korea’s National Intelligence Service May 5 of hiring a North Korean lumberjack working in Russia to detonate a “radioactive” and “nano-poisonous” bomb at a military parade to eliminate the young dictator.

“The [Korean People’s Army] is fully determined to wipe out the throng of rats sneaking around only in the dark afraid of the invincible might of the KPA,” North Korea’s state-run Korean Central News Agency wrote after the accusation. “We will ferret out to the last one the organizer, conspirator and followers of the recent hideous state-sponsored terrorism even by ransacking the whole earth,” the outlet said, allegedly quoting a North Korean worker.

North Korea claims that the citizenry is furious and demanding a forceful response to the reported attempt on Kim’s life.

“It is intolerable that the homicidal maniacs hatched a plot to commit a state-sponsored terrorism targeting the supreme leadership of the [Democratic People’s Republic of Korea] by use of bio-chemical substance,” Ho Song Guk, a Korean People’s Internal Security Forces officer, told KCNA, “The world will clearly see how merciless the Korean-style anti-terrorist striking actions will be and what miserable end the hostile forces will meet.”

The North continues to pursue its claims.

Han Song Ryol, North Korea’s vice foreign minister, said Thursday that North Korea will seek extradition for plotters and criminals abroad. “According to our law, the Central Public Prosecutor’s Office of the DPRK will use all available methods to start to work to demand the handover of the criminals involved, so as to punish the organizers, conspirators and followers of this terrible state-sponsored terrorism,” he said, according to USA Today.

It is unclear why North Korea is pushing this narrative at this time.

“DPRK is claiming US attempted to assassinate Kim Jong Un. I don’t believe it, but it is still deeply worrying,” Jeffrey Lewis, an arms expert and the director of the East Asia Nonproliferation Program in the James Martin Center for Nonproliferation Studies at the Middlebury Institute of International Studies at Monterey, tweeted in an early assessment.

“At best, DPRK knows story is BS — and is laying the propaganda groundwork for its own assassinations,” he explains, “At worst, DPRK believes it — and fear of decapitation will undermine stable deterrence of the DPRK.”

The North’s accusations come at a time of heightened tension between Washington and Pyongyang.

Image: Kim Il-Sung statue on Mansu Hill in the background.