Najib Is a Survivor in Malaysia’s ‘Game of Thrones’ 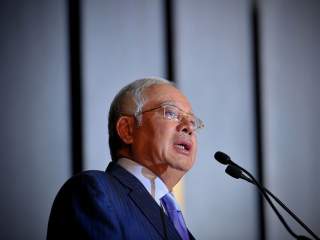 In the court of domestic and international public opinion, Malaysian Prime Minister Najib Razak is guilty of a level of corruption and abuse of office not seen in Southeast Asia since the days of the dictators. Najib’s rule evokes memories of Marcos’ Philippines and Suharto’s Indonesia. The parallels include a family bent on amassing vast wealth.

There is now enough evidence in the public domain to warrant the removal of Najib from office. But will he go?

Najib did consider resigning last year when the scandals over the plundered sovereign wealth fund, 1 Malaysia Development Berhad (1MDB), split his cabinet according to a source familiar with discussions at the time. The condition Najib set was that he and his wife were granted immunity from prosecution.

But talk of an early departure has now dissipated. It appears likely Najib will try to stay in office and fight for re-election in 2018.

The Najib government has another trait in common with the region’s old authoritarian regimes. It is resilience. One verity of politics in Asia persists: the moral outrage felt at a leader’s conduct will amount to little as long as he retains the support of a relatively small community of political and business elites.

Like those leaders from the authoritarian era, Najib has proved adept at survival by the liberal use of money and patronage to shore up allies and the effective use of the state’s coercive powers to divide, silence and jail opponents in politics, civil society and the media.

There are several factors that will bear on Najib’s fate between now and the next elections. Most of them suggest it will be hard to remove him from office and that the longer he stays the harder that outcome will be to achieve.

First, there’s the attitude of the ruling party. Najib retains control of the United Malays National Organisation (UMNO), the political party that is the core of the Barisan Nasional coalition government. As president of UMNO, he can count on the support of its central leadership and is estimated to have the allegiance of the overwhelming majority of regional chiefs.

One reason for the anger former prime minister Mahathir Mohamad now aims at Najib is that he can no longer treat the party as a personal fiefdom. In 2013, Najib blocked the election of Mahathir’s son, Mukhriz, for an UMNO vice presidency. It’s commonly believed Mahathir wants his son to become prime minister.

The UMNO elites are conscious of ensuring their own survival; with that in mind, they could desert Najib. But that will only happen if they sense a groundswell from the party’s Malay Muslim base. There is no evidence of a shift yet.

Second, there’s the state of the economy. Growth is slowing and the trend will continue—it could fall to 4.2 percent this year from 6 percent in 2014. The loss of state revenue from the slowdown is constraining public investment, which has been one of the drivers of growth. It has forced Najib to cut spending and find new sources of income. Last year, he introduced a GST, which contributed to dampening consumption.

There is unhappiness in the Malay heartland over tightening economic conditions. But, conversely, Malaysia will probably achieve high-income status before the next elections. Despite the softening economy and the 1MDB scandal, the International Monetary Fund credits the government with achieving macroeconomic and financial stability and setting up sustained medium term growth. It is unlikely the economy will be a sufficient source of grievance to bring out Malay voters in open opposition to the government.

Third, there’s the course of international investigations into the 1MDB money trail. Following a series of disclosures in the Wall Street Journal and the Sarawak Report of money flowing into Najib’s private accounts, he faces the near certainty of further embarrassing revelations about 1MDB money that could touch members of his family.

While Najib can’t influence foreign investigations, he has shown a capacity to effectively shutdown investigations in Malaysia. In doing so, he has reduced the potential for cooperation between domestic and international agencies. Without access to information from within Malaysia, there is less international investigators can prove.

Najib has also tamed the domestic media and clouded the 1MDB issues in a mass of claim and counterclaim. Although many Malaysians are angry, there are probably more who are confused and fatigued by the scandal.  He has probably been helped domestically by Saudi Arabia’s confirmation last week that it was the source of a $681 million “donation” to Najib, although there are still those who believe the money came from 1MDB.

Finally, there’s the political opposition and question of succession. Opposition leader Anwar Ibrahim is in jail and unable to run in 2018; most commentators agree his leadership days are over. But the opposition is divided by personality and political outlook. Without Anwar there is no obvious candidate able to rally its diverse membership.

A perverse alliance between Anwar and Mahathir—it was Mahathir who first had Anwar jailed—might produce a compromise. One possibility for the post is the elderly former Finance Minister and UMNO veteran Tengku Razaleigh Hamzah.

Other scenarios within UMNO make Malaysian politics look like Game of Thrones. Najib, the son of Malaysia’s second prime minister, could hand over to his cousin, Defence Minister, Hishammuddin Hussein, the son of its third prime minister. Another man with ambition is the Minister for Youth and Sports and UMNO vice president, Khairy Jamaluddin, who is the son-in-law of Najib’s predecessor, Abdullah Badawi.

The same nepotistic instincts afflict the opposition—Anwar’s wife and daughter want to keep the leadership of his People’s Justice Party in the family. And then there are Mahathir’s ambitions for his son.

But talk of a new leadership is highly speculative. The absence of serious challengers aids Najib’s chances of survival. Even if he were to go, the stranglehold of UMNO and the small-club politics is likely to stay. For those Malaysians anxious to see real change, there’s little hope to be found in the way the current scandal is playing out.

Donald Greenlees is a former Asia correspondent for several international and Australian publications. He is currently with the Australian National University pursuing a PhD in Indonesia. This article first appeared in the Strategist.