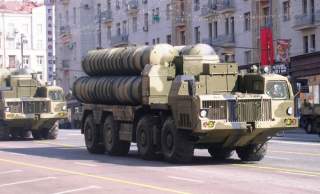 Speaking at the IDEF-2015 arms exhibition in Istanbul, Goreslavsky said that Turkey’s defense minister, İsmet Yılmaz, stopped by Rosoboronexport’s booth at IDEF-2015 to discuss the S-300 and other Russian arms.

"He said that this country is ready for the continuation of cooperation in the sphere of technology transfer," Goreslavsky said, TASS reported.

Turkey is currently looking to spend between $3.4-$4 billion on an air and missile defense system as part of its T-LORAMIDS program. Russia had put in a bid for its Antey-2500 air defense system (the export version of the S-300) for that contract, along with defense companies from Europe, the United States and China. However, according to Jane’s, Russia’s bid was for a whooping $9 billion.

In September 2013, Turkey shocked many by announcing it had selected the proposal submitted by China Precision Machinery Export-Import Corp. (CPMEIC) to jointly develop its HQ-9 system (FT-2000). This raised the hackles of Ankara’s NATO allies, including the United States, who said the HQ-9 system was not interoperable with NATO’s larger, Patriot-based air defense system.

In addition, many NATO allies, including Washington, said that connecting the HQ-9 to NATO’s Patriot systems would leave the latter vulnerable to Chinese espionage. Furthermore, CPMEIC, the maker of the HQ-9, is under U.S. sanctions because of its arms sales to countries like North Korea and Iran.

(Recommended: Russia's Supersonic Tu-160 Bomber Is Back: Should America Worry?)

Because of these concerns, Turkey agreed to reconsider its initial decision and has since reopened talks with the second and third bidders—Eurosam, which makes Aster 30, and Raytheon/Lockheed Martin, which submitted a bid for the Patriot system—for the T-LORAMIDS program contract. It has extended the deadline for the companies to re-submit new bids a number of times, most recently in January of this year.

Ankara has continued to insist that the companies’ willingness to transfer technologies to Turkey will figure prominently in its decision.

"If Turkey opts for direct purchase of the system then it will be obliged to make new off-the-shelf purchases 15 or 20 years later. We will not settle for this. Our target is to gain national technological capability in the missile project," a senior Turkish defense official said earlier this year. Ankara has also threatened to integrate whichever system it purchases with the rest of the nation’s air defense systems while leaving it out of the larger NATO network. Some experts doubt the viability of this plan, however.

Both Eurosam and the American companies have resisted transferring technology to Turkey, while CPMEIC—as noted above—agreed to jointly develop the HQ-9 system with Turkish companies. Goreslavsky’s comments suggest that Russia would also be willing to transfer some technologies to Turkey.

Still, if some NATO members were concerned about Turkey trying to integrate Chinese defense systems into the alliance’s Patriot network, they are unlikely to support integrating Russia’s S-300 into the the network. After all, nearly all NATO members feel more threatened by Russia than China, and NATO was formed primarily to counter Russia’s predecessor, the Soviet Union.

Ultimately, despite Goreslavsky’s claims to the contrary, Turkey is extremely unlikely to select the S-300 system Russia appears to be willing to sell to just about anyone these days, North Korea excluded.