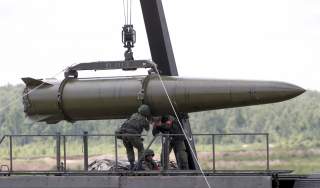 Since the accession of the Baltic nations into NATO, the region of Kaliningrad has been considered a strategic hotspot. Sandwiched between Lithuania and Poland, it is one of the major Russian ports that has access to Baltic Sea. Due to its location, Russian missiles and ships stationed in the region have the capability to deny significant areas of operation to American or European forces. Russian units stationed in Kaliningrad have a very strong preemptive strike capability against the Polish and Baltic militaries, as well as any of their North Atlantic Treaty Organization (NATO) partners in the region. Of all of these threats, the biggest one Russia poses from Kaliningrad is their deployment of Iskander-M ballistic missiles. NATO, including the nearby Baltic nations and Poland, currently have very little ability to counter these Russian forces.

With a published range of over 400km and a speculated range of over 500km, the Iskander would be capable of attacking every single Polish naval installation on the coast, as well as any installations in the Baltic states. While Poland’s procurement of the defensive ABM-capable PAC-3 Patriot missiles may mitigate this problem, it’s not clear whether countering the Iskanders is a planned role for the Patriots. Poland certainly would be wise to do so, as the Patriot is the only system in the region that has a chance of intercepting an Iskander. Older systems such as the Newa variants used by Poland are only effective against slow cruise missiles and aircraft. At the same time, Russia is phasing out its own older Tochka-U missiles based in Kaliningrad in favor of more Iskanders.

These Iskander-Ms would probably be used in combination with other weapons systems in the event of a preemptive strike. For example, air-launched cruise missiles (ACLMs) could be launched by planes from inside Russia. While there are no concrete figures on stockpiles of Russia’s ACLMs, Russia possesses numerous systems that could strike any target in Poland. The most common would be various variants of the Kh-55 and Kh-101 ALCM. These can be mounted on three different types of planes; the Tu-22M3, Tu-95MS and Tu-160. Notably, Tu-22M3s have been seen flying around the Baltic region and therefore are likely candidates for any ACLM attack. Furthermore, because these ACLMs have ranges in excess of thousands of kilometers, they wouldn’t even need to be launched from planes based in Kaliningrad to hit NATO targets in the Polish and Baltic region.

In addition to ALCMs and Ballistic Missiles, there is a sizable contingent of the Russian Navy stationed at Kaliningrad. While some of these vessels are currently under refit or repair, its unknown how many could be rushed into service in event of a conflict. The primary vessels that could augment a preemptive strike are the two Project 21631 Buyan-M ships, which have two four-cell UKSK launchers, which can fire the Kalibr cruise missile, which was proven in combat in Syria. There also are two Kilo-class submarines based in Kaliningrad with the capability to fire Kalibrs.

The rest of the Russian fleet stationed in Kaliningrad is focused on anti-surface, anti-submarine, and anti-air warfare, with the heaviest focus on anti-surface. This is carried out by one Sovremenny-class destroyer, two Neutrashimy-class frigates, four Steregushchiy-class frigates (corvettes in Russian designation), four Nanushka-III class corvettes, and seven Tarantul-II and Tarantul-III corvettes. All of these carry Anti-Ship missiles as a primary armament, ranging from the supersonic P-270 Moskit anti-ship missile (which also has limited land attack capability) to the newer subsonic Kh-35 anti-ship missile (AShM). The Buyan-Ms can also equip P-800 Onyks AshMs in their UKSK cells, further augmenting the fleet’s anti-surface capability if needed. Various other corvettes are also fielded in Kaliningrad, but they lack significant anti-surface or anti-air capability.

From the numbers above, it’s clear that the Russian Baltic Sea fleet stationed in Kaliningrad is significantly stronger than the entire Polish Navy. With regard to surface combatants, the Polish Navy fields two Oliver Hazard Perry-class frigates and three Orkan-class fast attack craft. The OHP-class frigates are armed with the American subsonic RGM-84 Harpoon AShM and the Orkans wield the Swedish subsonic RBS-15 AShM. The Polish Navy also possesses one Kilo-class submarine, but it is under heavy repair and is unlikely to be seaworthy any time soon. Finally, they also field three Kobben-class submarines, but the sole armament of those 1960s vintage subs are torpedoes. Moreover, the Lithuanian, Latvian, and Estonian Navies have no significant anti-surface warfare capability.

When one factors in land-based anti-ship capability, the picture doesn’t get better for NATO. While Poland recently procured the modern Naval Strike Missile, the Russians also field three modern, land-based anti-ship systems in Kaliningrad; the K-300 Bastion-P that utilizes the P-800 Onyks, the P-35 Redut and recently the Bal/Bal-E system that uses the Kh-35. The Bastion has the longest range of these systems, with a maximum of 350km. This means that the Bastion also covers most of the Polish coast and more than half of the distance from Kaliningrad to the Swedish coast. Russian Naval Aviation also has a significant presence in Kaliningrad, which contributes to naval Anti-Access/Area Denial (A2/AD). This is achieved with air-launched anti-ship missiles from their Su-24s and Su-30SMs, some of which were recently delivered.

The A2/AD capabilities also extend into the air, with S-300s and S-400s being stationed with the 3rd Aerospace Defense Brigade based in Kaliningrad. This unit also fields Tor-M1s and presumably Pantsir systems for shorter range air defense as well. These systems also cover the region, with the 250+ km range of the S-400 covering Poland down to Warsaw and the Baltics out to Vilnius. Estonia is also covered by S-400 deployments in Saint-Petersburg and by powerful radars in Kaliningrad, with the capability for detection out to 6000 km. The lesson from all of this is that Russia possesses a very strong naval and air Anti-Access/Area Denial capability in the Baltic Sea, giving it the upper hand over its neighbors.

The Polish and Baltic militaries lack any real ability to counter any of these Russian A2/AD assets in the region. While Poland is taking deliveries of the Joint Standoff Weapon (JSOW), Joint Air-to Surface Standoff Missile (JASSM), and JASSM-ER missiles, the quantities are rather small (78 JSOW, around 40 JASSM and up to 70 JASSM-ER with deliveries still ongoing). Additionally, these weapons would only be able to counter relatively static installations such as the Iskanders and land-based anti-ship missile launchers, and even then would require advanced intelligence gathering to do so. In order to gather such intelligence, Poland would have to expose their very limited fleet of F-16s to the very capable Russian anti-air S-400, probably resulting in losses. Meanwhile, the Russian Navy and Russian Naval Aviation would continue to field an impressive strike and A2/AD capability through the use of sea and air launched missiles. As Poland and the Baltic states field no air-launched anti-ship missiles of their own, they cannot menace the Russian fleet in a similar way. Similarly, the limited anti-air assets in Poland and the Baltics cannot deny the Russian Air Force and Russian Naval Aviation to the same degree that Russian anti-air does to Polish and Baltic assets. Ultimately, the playing field in the Baltic Sea remains clearly tilted in Russia’s favor.