Naval Aviation: To be Relevant or Not, That is the Question 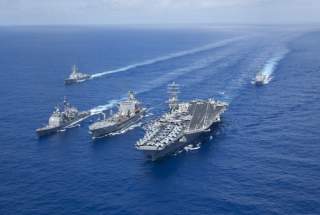 Sometimes it’s really all about the math and not a fuzzy conversation about policy.  Vice Admiral Mike Shoemaker, the Commander of the Navy’s air forces, otherwise known as the “Air Boss” within the service, stated at a public event at a Washington, DC think tank that naval aviation was working to find a balance between the tanker and surveillance missions, as well as the importance of stealth technologies, when considering the design characteristics of the MQ-25 “Stingray” aircraft.  A surveillance mission emphasis drives designers to a large wingspan, higher altitudes, and more efficient engine designs.  Tanking missions, on the other hand, require larger fuel capacities and higher speed/lower efficiency engines in order to match the strike aircraft’s transit profile.  Stealth would allow the tankers to accompany strikers farther into their attack missions or surveil closer to enemy defenses.  Shoemaker, to his credit, acknowledged that the design priorities of strike and ISR were discordant with each other.  It is clear that trying to get to a “sweet spot” between these two is counterproductive and misses the point; the decision to cancel the Unmanned Carrier Launched Airborne Surveillance and Strike program and create the MQ-25 Stingray tanker was done specifically to speedily address the Navy’s strategic deficit in long range strike.

The MQ-25 program was initiated at the direction of Office of the Secretary of Defense to produce a mission tanker as a means of extending the striking range of the Navy’s presently conceived air wing, composed of 490-mile combat radius FA-18 Hornets and 600+ mile F-35Cs.  Ideally a strike mission planner would like to have a tanker capable of “filling-up” its customer aircraft near their max range, and thus giving them a full tank to reach out beyond the 900 standoff range imposed upon the carrier by new Anti-Access/Area Denial weapons being developed by would be enemies like China and Russia.  Doing the math, this would drive aeronautical engineers to design an unmanned aircraft that can give 10,000 pounds of gas to each of two aircraft 500 miles from the carrier and still have enough fuel to make it back home.

To have an effective strike element, the standard attack formation would be composed of a minimum of four aircraft, so that equates to two mission tankers for the outbound leg, and then two mission tankers to “catch” the strike aircraft when they come off their targets and transit home.  This simple calculation suggests that the airwing needs a minimum of four tanker aircraft to accomplish a basic strike mission in perfect world.  Aviation maintenance officers, however, will tell you that you can only plan for an 80% availability rate (something is always being broken just when you need it) and critical missions always require a “spare” aircraft to be in a ready alert status, so now we are at six aircraft.  Add into the mix a consistent requirement to keep a recovery tanker over the carrier during flight operations to be prepared to give the nugget pilot enough fuel to make another approach after missing the wire the first time and now the requirement is seven aircraft. Seven aircraft large enough to give 20,000 pounds of fuel will mean that they are not small. Hence they will be in excess of a 1.0 spot factor (basically the size of a FA-18C Hornet) on the carrier’s deck.  Conversations with naval aviation planners suggest that 7.0 “spots” are all that is available on the carrier’s deck, an assertion that deserves further scrutiny.

Logically it is understood that only so many planes can be parked on an aircraft carrier’s 4.5-acre flight deck. In the past Nimitz class carriers could carry 90 aircraft by making full use of their deck, elevators and three massive hangar bays below the flight deck.  However, in recent years the hangar bays of the carrier have been overtaken by weight machines, treadmills, trash compressors, and recycled waste storage units which have had the net effect of decreasing the number of aircraft that can be carried on and hence launched from the carrier. Under these conditions, the “spot factor” of the new tanker is a critical design requirement.  It is important to pursue a design that brings the most fuel density per spot on the deck, something designers will consider when comparing wing-body-tail configurations versus flying wing designs.

For argument’s sake, let’s assume a spot factor of 1.5, which is slightly larger than a FA-18E/F spot factor of 1.46.  Seven aircraft, the minimum required for long range strike operations, with a spot factor of 1.5 would require 10.5 spots on the carrier’s flight deck. This is three and a half spots more than the 7.0 currently offered, but let’s reconsider some aspects of the current air wing configuration.  Today’s carrier air wing carries 44 FA-18 Hornets; 24 FA-18C/Ds and 20 FA-18E/Fs.  During strike missions, six FA-18E/Fs launch in tanker configurations, carrying either three or five external fuel tanks depending on the role they are to play (mission or recovery tanker).  If the air wing gains a dedicated unmanned tanker, the six FA-18E/F Super Hornets that provided tanking will no longer be needed for that role (6 X 1.46 = 8.76 spots). Three of these aircraft could be returned to the air wing to perform fighter and strike missions, but the spots associated with the other three former tankers (3 X 1.46 = 4.38 spots) could be combined with the 7.0 spots already allocated to the new unmanned tanker to provide 11.38 spots on the deck, enough space for seven large, 75-foot wingspan aircraft with spot factors of 1.5 or even nine, medium, 70-foot wingspan aircraft with spot factors of 1.2.  Nine tankers would enable the air wing to launch up to six strike aircraft beyond 1000 miles from the carrier’s deck.  Hence, a 7.0 spot factor limitation should not be viewed as a hard disqualifier in unmanned tanker design or concepts of operations.  These types of calculations are arcane, but they are important and should openly be discussed when considering the design and development of the MQ-25A Stingray.

Stealth as a design characteristic illuminates another critical consideration of the MQ-25A’s design: It must be “evolvable” into an unmanned strike aircraft.  A design that is capable of being a bomber can also be a tanker and an ISR platform. A centerline bay that can carry 10,000 pounds of fuel in a bladder can also carry 10,000 pounds of ordnance internally or some other combination of ordnance and fuel. Such a design could also be outfitted with intelligence-surveillance-reconnaissance cameras and electronic sensors as well, but it must be understood that while an aircraft primarily designed to be an ISR platform could be pressed into service as a tanker, it cannot evolve into a bomber.  The basic design requirements, as described by the “Air Boss” himself, are too dissimilar.  What’s more, the carrier does not have a standing requirement for intelligence-surveillance-reconnaissance from its deck.  The land based Broad Area Maritime Surveillance MQ-4C Triton was sold to DoD by the Navy as a provider of surveillance orbits for deployed carrier strike groups.

Naval aviation must go “all in” on a tanker that can progress towards being a strike aircraft.  The overriding requirement is to expand the striking range of the carrier air wing outward beyond the reach of the stand-off weapons arrayed against the flat top.  This is the critical strategic issue of the hour, and if the Navy does not address it directly and emphatically with a fully realized unmanned tanker that can extend the strike range of the current carrier air wing and have the potential to evolve in the future to perform strike missions, it will place the carrier and its air wing in a position of decreasing relevance in the future security environment.  There is no balance or “sweet spot” between the tanker and ISR missions. There is only the choice of building a tanker and choosing to be irrelevant.