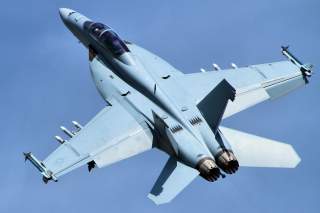 The Navy aviation community writ large is trying to get “crazy smart” about its own maintenance and testing procedures for the F-18, overcoming a sense of remote-control upkeep that has been associated with the Hornets and Super Hornets.

U.S. Navy F/A-18 operators have enough of the hypoxia and other breathing-related problems that have seemingly plagued the aircraft over the past couple of years.

One squadron, for example, has come up with a rather simple solution for a jet that gives its pilots such grief,

“They put them on probation,” Capt. David Kindley, program manager for the Navy’s mainstay aircraft, told Scout Warrior in an interview.  “They put it in jail.”

And to get out of jet jail, the aircraft must go through a pretty rigorous round of testing and vetting. “They are taking ownership of their own (hypoxia-related) issues),” Kindley says. “They are getting pretty smart on maintenance – crazy smart.”

In the same way, the Navy aviation community writ large is trying to get “crazy smart” about its own maintenance and testing procedures for the aircraft, overcoming a sense of remote-control upkeep that has been associated with the Hornets and Super Hornets.

“The thing about the F-18,” Kindley says, “is that they are so easy to maintain. It’s almost like we’ve taught our maintainers to think like they’re working on Xerox machine – you just open the door and unjam it.”

That’s been the approach, until rather recently, about how the Navy would look at revamping the environmental control system (ECS) system and components that provide the breathable air pilots rely on in the cockpit. But now, Kindley, says, there’s a new mindset – and the aviation community is ready to overhaul the entire process, material set and general way of thinking, if necessary.

The Navy needs to do this because it needs to keep the aircraft flying. Delays in the F-35 Joint Strike Fighter deployments coupled with potential Super Hornet upgrades have made it possible – and in cases, necessary – for mixed-aircraft squadrons well into the coming decades.

F-18 manufacturer Boeing has put together advanced Super Hornet systems and designs that give it greater stealth, range, communications and situational awareness – and Kindley says that for the most part the Navy is all aboard on the upgrades, especially because many of the components already exist within programs of record.

But first, the Navy must work through its hypoxia-related issues with the aircraft, especially for legacy Hornets, the F/A-18 A-D models, whose Hypoxia-incident-related rate per 100,000 flight hours nearly doubled to 57.24 in fiscal 2015 from 30.20 the previous year. For EA-18G Growlers, the rate grew to 90.83 from 42.89 during that time.

The Growlers have a specific problem – they operate generally higher altitudes and one of the air lines freezes up. Kindley says the Navy is looking at wrapping it in a blanket, writing new software or redesigning the system.

The Navy needs to do a bit more engineering for the other aircraft.

First, the Navy is being less selective on the ECS components it’s going to review, starting with those on the older legacy Hornets. "A little over a year ago, we picked ECS components -- the big eight. But now, we’re beyond 30,” he added.

And the Navy has now started to look at, and replace components, before they broke. “We're not going to do fly to failure anymore. Now we have life limits on these components. That was a first step, and we’re beginning to see some benefits in the legacy world,” Kindley said.

That kind of work is also driving the Navy maintainers to question more what they do and why they do it. Kindley said “instead of waiting for something to fail, they are now asking deeper questions. How do you know a part is good? What makes it ready for re-use?”

Some components, he noted, the same component several times. “We started to question acceptance-test procedures.”

The Navy has done a bottoms-up review at places like Cherry Point where the components are repaired to make sure of the testing, repairing and training.

“Are we even doing the right tests in the first place?” Kindley asks. “On one of our valves, the acceptance procedure was based on the voltage. But we never pushed air through it – that’s what the valve is for. This doesn’t make sense.”

In some cases, he says, maintainers would follow every procedure to address certain issues, but nothing would work, dropping the jet into what the community called a “cul-de-sac,” and leaving it there. Now, he says, they want to provide every tool and resource to find out what’s really going on.

It has come to a point though, the Navy is ready to replace every component, he says, “in one fell swoop.”

When it comes to Super Hornets, Kindley said, the default answer to almost every breathing issue is “contamination.” The idea was, “If we’ve exhausted everything else, it must be contamination. But now we’re going to stop pushing the ‘easy button’ and figure out no-kidding what’s going on.”

The Navy is outfitting its pilots with tubes – essentially sponges that will pick up all kinds of particles to be analyzed. The service also will put hydrocarbon detectors in the cockpit. Flyers also will get “slam sticks,” little orange matchbox-looking things, which records and time-stamps pressure swings. Combined with other sensors, the data, Kindley says, should provide a real snapshot of what’s happening and when.

“It will show you where the spikes are, and give you a much better picture of what’s going on in the air,” he says. “This is going to be accelerated, pushed out to the squadron.”