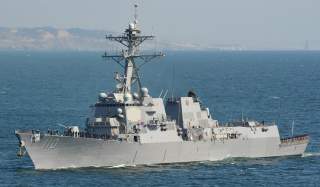 The Navy will start construction of its first next-generation, high-tech Flight III DDG 51 Arleigh Burke-Class Destroyer in May of this year - as part of its broad service plan to deploy a new fleet of technically advanced warships able to fire new weapons, better detect enemy attacks and prepare for a highly contested future maritime threat environment.

The Navy hopes to enter an efficient, cost-saving multi-year contract initiative to build the first 10 Flight III ships; the first two of the new class of destroyers are now under contract. Huntington Ingalls Industry is building one called DDG 125, and Bath Iron Works is on contract to build DDG 126.

Navy officials tell Warrior that AMDR has completed a System Functional Review for integration with the upgraded Aegis Baseline 10 radar and software systems.

​The AN/SPY-6 platform will enable next-generation Flight III DDG 51s to defend much larger areas compared with the AN/SPY-1D radar on existing destroyers. In total, the Navy plans as many as 22 Flight III DDG 51 destroyers, according to a previously completed Navy capabilities development document.