Nazi Germany Tried to Build an 'A-10 Warthog'. It Ended Up Being a Huge Mistake. 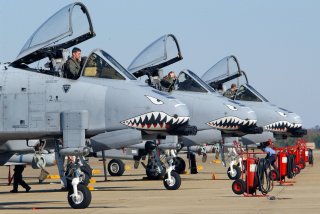 The high command “underestimated the need for a dedicated ground-attack aircraft — and particularly a dedicated tank-killer — until it was far too late,” he said. “For example, prior to Operation Barbarossa, the German Abwehr had estimated that the Soviets had only about 10,000 main battle tanks. The actual number was about 24,000. By the time the Germans realized that they needed a dedicated tank-busting aircraft such as the Hs 129, the die had already been cast.” What’s more, the German government treated Henschel as an all-purpose manufacturer and often directed it to build aircraft for other firms.

Twin engines. A heavily-armored cockpit that protected the pilot from small-arms fire. The aircraft even eventually had the heaviest and most powerful forward-firing cannon ever fitted to a production military aircraft during World War II.

There was just one problem: By all accounts, the Hs 129 was a questionable performer. In fact, the original Hs 129 A-1 series was so badthat the Luftwaffe refused to accept any of the A-1s for service.

“The Hs 129 was a dog of an airplane that should have been completely redesigned to incorporate more powerful engines, more reliable engines, lower stick forces, better maneuverability and better visibility,” Little continued. “Unfortunately for the Luftwaffe, the need for the Hs 129 was so great that it had to enter service even though it was far from combat-ready. With that said, the Hs 129 was rugged and popular with its pilots — that’s about all that it has in common with the A-10.”

The high command “underestimated the need for a dedicated ground-attack aircraft — and particularly a dedicated tank-killer — until it was far too late,” he said. “For example, prior to Operation Barbarossa, the German Abwehr had estimated that the Soviets had only about 10,000 main battle tanks. The actual number was about 24,000. By the time the Germans realized that they needed a dedicated tank-busting aircraft such as the Hs 129, the die had already been cast.”

Then there were the design problems. The Hs 129 was slow, with a top speed of less than 200 miles per hour when fully loaded. The plane’s three-inch-thick canopy glass impeded the pilot’s view.

Perhaps embracing the idea that flying a plane that doesn’t kill them might make them stronger, most pilots of Hs 129 actually liked the aircraft for one significant reason — it was damn near indestructible. It could also haul could carry some very heavy Rüstsätze — armament packages — for destroying armored vehicles.