Need a Cheap Fighter Aircraft? The JF-17 Might Work 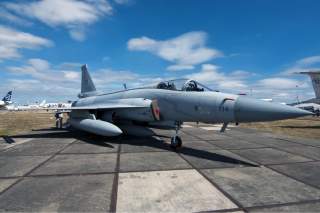 The Aviation Industry Corporation of China (AVIC) and its and its partner, the Pakistan Aeronautical complex (PAC) Kamra, is once-again reiterating that it has signed a deal to sell the JF-17 Thunder to an unnamed customer at the Dubai airshow.

Pakistan and China had previously made similar statements at the Paris airshow earlier in the year. China has geared the lightweight fighter—which is also known as the FC-1 Xiaolong—to aim for the low-end of the international fighter market.

“After several years’ co-development and marketing, China and Pakistan have signed a contract with third party customer for the purchase of JF-17 Thunder,” reads a statement released by AVIC. “As China and Pakistan improve their ability and skills in co-developing JF-17 Thunder, the aircraft is becoming a ‘Blue Ocean product’ with much market potentials as an ideal replacement for second-generation fighters in many countries’ air force.”

Though billed as a development partner, Pakistan—which co-produces part of the aircraft—was essentially the first and only customer for the Chinese jet—which is not operated by the People’s Liberation Army Air Force (PLAAF). The JF-17 is replacing a host of aging warplanes in Islamabad’s arsenal including the Chengdu F-7, Mirage III, Mirage V and the A-5 Fatan strike aircraft while complementing the Lockheed Martin F-16 Fighting Falcon.

According to AVIC statement—Pakistani Air Vice Marshal Arshad Malik said that the Pakistani air force currently has sixty JF-17 fighters in its inventory. The service is planning to buy forty more jets in the future. Malik indicated that later model JF-17s will be upgraded with in-flight refueling capability, an advanced data link, more capable electronic warfare systems and a host of new precision-guided weapons in the future.  Malik also said that a combat-capable trainer is expected to fly next year. Pakistan will buy the two-seat version of the jet.

The JF-17—especially the early Block 1 model—is a basic low-cost fighter aircraft. A Russian-made Klimov RD-93 engine producing roughly 19,000lbs of thrust powers the aircraft, which gives it a max speed of Mach 1.6. The airframe offers an eight G capability, which combined with the PL-9C high off-boresight missile gives the aircraft decent capability within visual range. It is equipped with the Chinese-built KLJ-7 radar—which is compatible with the PL-12 active radar-guided missile—which affords the jet beyond visual range capability. It also has

The improved Block 2 version of the jet is the version with in-flight refueling capability and improved avionics that Malik was referring to earlier. A third Block 3 variant is also under development allegedly with a Chinese-built active electronically scanned array radar, helmet-mounted cueing system, an infrared search and track system and a host of new weapons. The improved variant might also replace the Russian-made RD-93 with a Chinese Guizhou WS-13—assuming China manages to complete development of that engine.

The Chinese are developing the jet incrementally—upgrading the plane over time with new avionics and weapons—which is a smart move. But the JF-17 will never be a world beating fighter. It may not even be a good fighter—it’s designed for the low-end of the market. But it is designed to be “good enough” for nations that need decent capability that won’t break the bank. But the jet is in production after a relatively quick development cycle, it is being built in numbers and is more than competitive with its nearest potential adversary. In that respect, the program is a success, especially if China can find more buyers. AVIC anticipates a market for at least 300 JF-17 Thunder fighters.