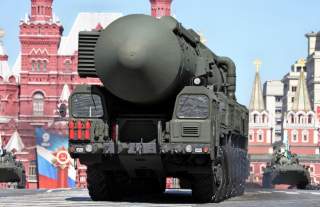 Russia is worried that American developments in intercontinental-range hypersonic weapons—known in Pentagon parlance as Conventional Prompt Global Strike—could give Washington the ability to disarm Moscow without resorting to a nuclear first-strike. Meanwhile, the Russians are developing their own hypersonic strategic weapons to ensure their nuclear deterrence remains intact.

“The development of intercontinental-range hypersonic weapons is especially alarming,” wrote Vladimir Dvorkin, a military fellow at the Carnegie Moscow Center in a new report. “For instance, many Russian officials and experts believe that hypersonic weapons deployed by the United States will drastically increase the effectiveness of the global strike concept and give Washington a capability to deliver a disarming non-nuclear strike against Russia’s Strategic Nuclear Forces.”

The Kremlin’s fears about Washington trying to gain nuclear superiority over Russia—and the Soviet Union before it—are not new. Indeed, the Cold War might have ended far more quickly had it not been for Soviet premier Mikhail Gorbachev’s objections to President Ronald Reagan’s Strategic Defense Initiative  (SDI). In fact, with the exception of the SDI sticking point, the two leaders had very nearly agreed to eliminate nuclear weapons altogether during a summit meeting in Iceland in October 1986. “At Reykjavík, my hopes for a nuclear-free world soared briefly, then fell, during one of the longest, most disappointing—and ultimately angriest—days of my presidency,” Reagan recounted in 1990 according to Jack Matlock, a former National Security Council staffer and U.S. ambassador to the Soviet Union in his book Reagan and Gorbachev: How the Cold War Ended.

Gorbachev simply did not believe the United States would share the SDI technology with the Soviet Union as Reagan had offered. “Excuse me Mr. President, but I cannot take your idea of sharing SDI seriously,” Gorbachev had told Reagan, Matlock recalled. “You are not willing to share with us oil well equipment, digitally-guided machine tools or even milking machines. Sharing SDI would provoke a second American Revolution! Let’s be realistic and pragmatic.”

Indeed, the Soviet Union started to do intense development work on hypersonic weapons in 1983 because of Reagan’s SDI program, according to Dvorkin’s analysis. Though it must be noted that according to Matlock’s account—citing first hand sources—the Soviet defense establishment did not consider SDI to be a technically feasible concept. “The Soviet Union responded to SDI with a number of symmetric and asymmetric steps,” Dvorkin wrote. “Albatross [missile system]—referred to in later publications as Project 4202—was among the latter. “

Moreover, according to Dvorkin’s research, the Soviet Albatross program didn’t end with the collapse of the Soviet Union—the program has continued through to the current era. “In theory, the complex’s design was relatively simple: At boost phase, the UR-100N UTTKh (SS-19) intercontinental ballistic missile (ICBM) would launch a so-called hypersonic gliding vehicle (HGV) to an altitude of 80 to 90 kilometers, after which the HGV would make a low-angle turn toward the earth’s surface and accelerate at a descending trajectory, gliding to intercontinental range at hypersonic speed, or five times the speed of sound. An HGV armed with a nuclear weapon would supposedly make rapid cross-range maneuvers to circumvent ground-based U.S. missile defenses,” Dvorkin wrote. “The first Albatross missile flight tests were reportedly conducted in 1991–1992, and additional tests took place in 2001 and 2004. UR-100N missiles with an HGV were launched from open-roof silo missile launchpads, as the size of the HGVs prevented the roofs from closing.”

Once it is fielded, the Russian hypersonic glide weapons could be fielded on the Sarmat heavy ICBM or the smaller road-mobile Topol-M ICBM. However, because the Albatross was developed to defeat SDI technology, ironically, the HGV is vulnerable to conventional anti-ballistic missiles weapons such as the Patriot PAC-3 or the THAAD. “There is no available information on how Albatross, or Project 4202, HGVs are protected from ground-based missile defenses when they decelerate during the last segment of their trajectory,” Dvorkin wrote

But there are a number of options available to the designers. “For instance, after detaching from a launch vehicle, an HGV could continue its flight at a slightly lower altitude, staying at 40–60 kilometers until it practically reaches the target. (Such a flight path would avoid adding to the thermal load significantly and would not drastically reduce the HGV’s velocity.) When it is almost to the target, the HGV would then start its near-vertical descent, which would also reduce the risk of being struck by ground-based missile defenses. It’s quite possible that these methods of missile defense penetration are also part of Project 4202,” Dvorkin wrote.

While the Kremlin is developing its own hypersonic weapons, Moscow is fearful of American—and to a lesser extent—Chinese hypersonic weapons and their potential to launch a disarming strike. However, Moscow’s fears of American hypersonic weapons are probably unfounded. As Dvorkin states—and indeed several U.S. official have described—the Pentagon’s developmental hypersonic prompt global strike weapons are aimed at fleeting high-value targets—mostly due to their outrageously high cost. “The United States apparently intends to use its hypersonic weapons against certain particularly dangerous targets that are capable of quick location changes, but solving this problem doesn’t require the large-scale deployment of such weapons,” Dvorkin wrote. “The situation is somewhat analogous to European and global U.S. missile defense systems, which are capable of intercepting individual and serial ballistic missile launches and pose no threat to Russia’s nuclear deterrent capability.”

Nor is the United States—under any sane President—likely to attempt to launch a decapitating strike against the Kremlin leadership. “Such a strike would disable the central command, leaving huge quantities of both strategic and nonstrategic nuclear weapons with no central supervision. Such a situation would have unpredictable consequences that might also affect the United States. Second, Soviet Strategic Nuclear Forces reserves boasted high survivability—thus, a retaliatory strike would have been launched in any event,” Dvorkin wrote. “For the same reasons, the United States is not planning to launch any hypersonic weapon strikes against Russian high command centers. Besides, some of the sites are well protected against nuclear strikes, let alone high-precision non-nuclear ones.”

While hypersonic weapons are not likely to be threat to either Russia or the United States’ nuclear deterrence, Dvorkin suggests that Washington, Moscow and Beijing consult each other on the development of such weaponry. “Trilateral consultations on hypersonic weapons involving Russia, the United States, and China could prove very helpful. They would allow the parties to formulate a more accurate understanding of the appropriate scale and costs of deploying hypersonic weapons,” Dvorkin wrote. “Over time, it is conceivable that such consultations could help persuade policymakers in these three countries to take more seriously the need to reach agreement on minimizing or removing the destabilizing impact of all types of long-range, high-precision delivery systems of non-nuclear weapons.”