A New Report Reveals Why the U.S. Navy Is in Big Trouble (And Offers a Solution) 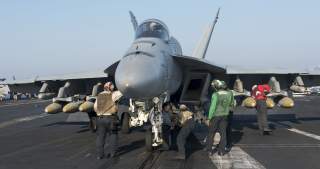 The United States Navy has released its new Strategic Readiness Review (SSR), which was ordered by Navy Secretary Richard Spencer earlier this year in September. The SSR, as was expected, has revealed severe deficits in the U.S. Navy’s readiness level, which have led to a rash of accidents in recent month.

“The U.S. Navy is without question the most capable in the world but its primacy is being challenged as it sails into a security environment not seen since before the collapse of the Soviet Union,” the SSR reads. “Another era of sustained peer-on-peer competition has arrived and failing to recognize and prepare for its very different challenges will have severe consequences. Even in a non-peer-on-peer environment, the Navy and the nation can ill afford the readiness deficiencies revealed in the recent ship-handling incidents in the Pacific.”

Over the years, due to a brutal operations tempo and a shrinking fleet, the Navy has reached the breaking point. “Many of these deficiencies have been observed and authoritatively documented for years, however the naval capacity that had been built up for the Cold War masked their impact,” the report reads. “That past margin in ships, aircraft, and sailors enabled the Navy to make mitigating adjustments in fleet operations, training, maintenance, and funding to accomplish assigned missions. Today, those margins are long gone. A smaller fleet with fewer sailors is straining to meet the operational demands placed upon it.”

The fleet got to this point due to the cumulative effects of decisions made over the past 30 years. “The cumulative effects of well-meaning decisions designed to achieve short-term operational effectiveness and efficiencies have often produced unintended negative consequences which, in turn, degraded necessary long-term operational capability,” the report states. “Simultaneously, Navy leaders accumulated greater and greater risk in order to accomplish the missions at hand, which unintentionally altered the Navy’s culture and, at levels above the Navy, distorted perceptions of the readiness of the fleet.”

The report make four recommendations to get the service back on track, but it will take will time, effort and money for the Navy to recover.

- Re-establish Readiness as a Priority: The creation of combat ready forces must take equal footing with meeting the immediate demands of Combatant Commanders. Sufficient time for training crews and maintaining ships is critical for restoring and monitoring readiness.

- Match Supply and Demand: There must be a greater appreciation for the reality that only so many ships and sailors can be made available in a given operational cycle. The Navy must establish realistic limits regarding the number of ready ships and sailors and, short of combat, not acquiesce to emergent requirements with assets that are not fully ready.

- Establish clear Command and Control Relationships: The Navy must realign and streamline its command and control structures to tightly align responsibility, authority, and accountability.

- Become a True Learning Organization: Navy history is replete with reports and investigations that contain like findings regarding past collisions, groundings, and other operational incidents. The repeated recommendations and calls for change belie the belief that the Navy always learns from its mistakes. Navy leadership at all levels must foster a culture of learning and create the structures and processes that fully embrace this commitment.

According to the Navy, the SRR was an independent review led by a team of experts that examined the “systemic conditions influencing and existing within the Navy over the last 30 years.” The study ran in parallel with the U.S. Fleet Forces Command’s Comprehensive Review—and considered its findings—but the SSR team’s assessments and judgments are independent of the Comprehensive Review according to the Navy.