Newsflash: Working Is the Best Antidote for Poverty 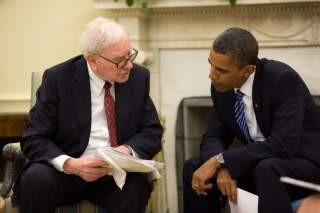 Buffett is wrong. Economic growth has considerably benefited low-income workers, while the EITC has problems as an anti-poverty tool. It has even larger problems with out of control erroneous payments. To help low-income workers, conservatives should focus on fixing these problems and mitigating federal disincentives to work and marriage that trap too many in poverty.

Popular opinion holds technology has made finding work harder for the less skilled. This is only partly true. True, technology has shifted employment away from routine tasks that computers can automate. The economy now needs fewer secretaries or assembly line workers than a generation ago—a painful transition for many.

However, automation also reduces costs and leaves Americans with more money to spend elsewhere. This has boosted both living standards and employment in non-routine jobs. Today’s economy also needs many more home care aides and IT staff than a generation ago.

On balance these changes have benefited most workers. Earnings have increased up and down the income ladder since the late 1970s. These changes have particularly benefitted the least skilled, who disproportionately work in non-routine manual jobs. Their skills are needed by more employers than before.

Many knowledgeable Americans think otherwise. This is because demographics and the economy have changed considerably since the 1980s. Household sizes have shrunk, the population has aged, and benefits now make up a much larger share of workers’ total earnings. Ignoring these shifts produces misleading conclusions.

Fortunately the Congressional Budget Office produces earnings figures accounting for these shifts. Their data shows that between 1979 and 2007, labor market earnings for the middle fifth of non-elderly households increased by a third, after adjusting for inflation. Compensation for the bottom fifth increased by about half.

The recession has partly eroded these gains, but most low-income households still enjoy higher material living standards than their predecessors. Anyone who doubts this should look at how consumption patterns have changed over the past generation. Goods that were once middle-class luxuries have become widespread among lower-income families.

In the 1980s, fewer than half of Americans in the bottom quintile had air-conditioning in their homes. Two-thirds did not have a drying machine. Just a third used a microwave. Virtually none had computers.

Today low-income Americans live in homes a fifth larger than in the 1980s. Most have drying machines. Only 1-in-6 go without air conditioning. Just 1-in-13 lack microwaves. 98 percent have televisions. Half own a computer. Half own smartphones—technological marvels unimaginable in the era of Commodore 64s. Small wonder the vast majority of Americans tell pollsters they live better than their parents.

Borrowing cannot explain these changes. Federal Reserve data show that low-income families spend little more of their income on debt-payments now than in the 1980s. Less-skilled Americans enjoy higher standards of living primarily because the rising tide of economic growth has lifted their boats, too.

Of course this does not make poverty pleasant. But policymakers should put connecting the poor to the labor market at the center of their anti-poverty efforts. In this regard, the EITC is better by far than raising the minimum wage or the vast majority of federal anti-poverty programs, which do not require work.

However, supporters have considerably oversold the EITC’s effectiveness. It’s true that policies promoting work can be an extremely effective tool to combat poverty. It’s also true that the EITC is intended to promote work. But contrary to conventional wisdom, the literature has consistently shown that the ETIC actually discourages work in two-income households.

And a new study offers compelling evidence that single mothers who are already in the workforce —a group that has historically increased participation in response to the EITC—worked less after the recent most recent EITC expansion in 2009.

Furthermore, the EITC’s complicated eligibility requirements consistently put the program at the top of the Office of Management and Budget’s “high-error” list. According to data from the Treasury Department, the IRS made almost $18 billion in improper EITC payments last year and $134 billion in improper payments over the last 10 years. This isn’t to say that policymakers should abandon the EITC. But the program needs reforms before conservatives should advocate expanding it.

Instead conservatives should focus their efforts on removing roadblocks the federal government places in front of those trying to get ahead. Americans who work full-time and get married are dramatically less likely to live in poverty than those who do not. Unfortunately most federal welfare programs discourage both full-time work and marriage. Even the EITC reduces benefits for single mothers who marry their children’s fathers.

Congress should restructure federal benefits to remove these marriage penalties. It should also make working—or work-related activities—a prerequisite for able bodied adults to collect federal benefits. Those who do not participate in the labor market cannot share in the benefits of its growth.

James Sherk is a Research Fellow in labor economics in the Center for Data Analysis and Paul Winfree is the Director of the Thomas A. Roe Institute for Economic Policy Studies at The Heritage Foundation.