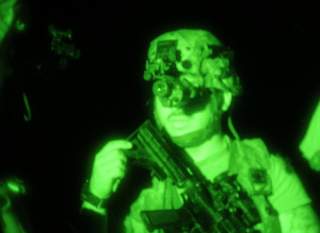 Army Soldiers tracking and attacking enemies in fast-moving combat situations will soon be able to shoot targets without bringing their rifle and weapons sights up to their eyes -- due to emerging wireless technology connecting thermal sights to night vision goggles, service officials told Scout Warrior.

A wireless link will show the reticle from thermal weapons sights directly into the night vision goggle display, allowing soldiers to quickly track and destroy targets with great accuracy without needing to actually move the weapon to their shoulder and head to see the crosshairs through the thermal sights.

Enhanced targeting technology is of particular relevance in fast-developing battle circumstances such as Close Quarter Battle, or CQB, where targets can emerge and disappear in fractions of a second. Being able to strike quickly, therefore, can bring added lethality and make the difference between life and death for soldiers.

“This provides rapid target acquisition capability. The soldier no longer has to shoulder their weapon. If you can imagine looking through a goggle and some target or threat presents itself, a soldier no longer has to come all the way up. He or she can put the bubble on the image and engage the target in that manner,” Lt. Col. Timothy Fuller, Product Manager, Soldier Maneuver Systems, told Scout Warrior in an interview.

FWS-I is a thermal sight mounted on top of an M-4 rifle. It can also be configured for crew-served weapons such as a .50-cal machine gun or sniper rifle, Army officials said.

“The thermal image you are seeing is wirelessly transmitted to the Enhanced Night Vision Goggle III and is displayed in its display. What you ultimately have is the crosshairs and a portion of the thermal weapon sights image spatially aligned to the image that the soldier sees in the night vision goggles,” said Maj. Nicholas Breen, Assistant Product Manager, Family of Weapon Sights-Individual.

The Army’s ENVG III, which will begin formal production next Summer, will provide soldiers with image-intensification, improved resolution and a wider thermal camera field-of-view compared to prior models.

“The night vision goggle takes two channels. This incorporates an image-intensification where you look through your goggle and are seeing a standard night vision goggle view and a thermal image all in one image.  The two channels are on top of one another and they are fused together so that you get all of the benefit of both channels,” Maj. Brandon Motte, Assistant Product Manager, Enhanced Night Vision, said.

The improved, or higher-tech, ENGV IIIs will also help with maneuverability and command and control by enabling soldiers to see a wider field of view with better resolution and even see infrared lasers, Motte added. The technology is now going through production qualification testing and will be operational in 2017.

“This greatly improves the lethality and visibility in all weather conditions for the soldier - one very small, very lightweight night vision goggle,” Motte said.

Of greatest importance, however, is that the ENVG III will enable the wireless link with the weapon sights mounted on the gun.

“The reticle will show up in the night vision goggle when the weapon is pointed at a target,” Fuller explained. “As soon as you see a target, you can engage. You no longer have to bring it up to your face. The display is right in front of your eyes.”

The Army plans to acquire as many as 40,000 ENVG IIIs. ENVG III is being engineered to easily integrate FWS-I as soon as it is slated to be operational in 2018.