No Bigger Question: Will There Be War with China? 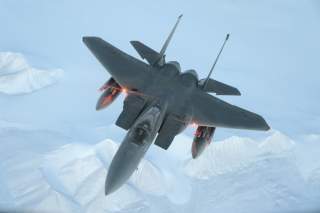 A Note from our Executive Editor, Harry J. Kazianis: I am pleased to announce that beginning today, over the next several months and on a weekly basis, The National Interest, will be running a series of articles adapted from Peter Navarro’s new book Crouching Tiger: What China’s Militarism Means for the World.

The article topics have been selected to highlight some of the top issues likely to be debated in the 2016 presidential election.  The series itself will be unique for our readership as each Crouching Tiger article will be accompanied by a short video from the companion documentary film.  These videos will feature some of the top experts in the world – including many whose own articles have appeared on the pages of The National Interest.

We hope, then, you enjoy this series and we welcome your comments.  Of course, the opinions expressed are those of the author and film director Peter Navarro and not necessarily those of the National Interest.

In the Gobi desert, on the Northern rim of the People’s Republic of China, there sits a target on the cold and barren landscape that conforms almost perfectly to the size and shape of an American aircraft carrier.  China’s vaunted Second Artillery Corps has used this target to perfect the delivery of a game-changing anti-ship ballistic missile that China openly calls its “carrier killer.”

Over 1,000 miles away, at the Xichang Space Launch Center in Sichuan province, military strategists are testing equally game-changing anti-satellite weapons like the Dong Neng-2 high Earth orbit missile.  It is designed to ram American satellites out of the sky – and thereby neutralize the U.S. strategic advantage in space.

And even as the U.S. has committed by treaty with Russia to significantly reduce nuclear warhead stockpiles, China continues to develop its Great Underground Wall. This maze of tunnels, up to 3,000 miles long, now harbors one of the world’s most diverse missile arsenals – from the tactical and theater to the strategic.

Why is China developing such capabilities if, as its leaders have repeatedly claimed, China seeks only a peaceful rise? This may well be the most important question of our nuclear-tipped times – and one destined to dominate the 2016 presidential election debate.

To find possible answers, I filmed interviews with top experts across the spectrum of thought – from Heritage and Hudson to Brookings and Carnegie, from the Institute of Peace to the Naval War College.  The Crouching Tiger Project is the result, and the “geopolitical detective story” that unfolds in the 45 chapters of the book and companion 11 documentary film episodes hits these main points of the “will there be war with China?” compass:

If China seeks merely to protect its homeland after a “Century of Humiliation” and if it is only concerned about guarding the global trade routes it needs to prosper, then the world has nothing to fear from its rapid military buildup.  If, however, China and its leader Xi Jinping seek to follow in the revanchist footsteps of Russia and Vladimir Putin and seize territory from neighbors – and perhaps attempt to drive U.S. forces out of the Western Pacific – then the world has a very big problem.

Some experts see China’s capabilities as “pathetic” and of little threat in the near or even distant future.  Others expect China to reach parity with the United States military if not in years then certainly within decades.  Most agree that China’s doctrine of asymmetric warfare and its emerging anti-access, area denial strategy (or A2/AD) poses an increasing risk to an American presence in the Western Pacific.

The obvious include China’s “renegade province” of Taiwan, Japan’s Senkaku Islands, the resource rich waters of the South China Sea and the wild card of North Korea.  The most subtle – perhaps with the highest stakes – is the emerging struggle between Beijing and Washington over freedom of navigation and overflight.

Many experts appearing in Crouching Tiger question whether the traditional triad of economic engagement, economic interdependence, and nuclear deterrence will keep the peace. If these pathways no longer work, what will? This debate is not just about whether Japan should remilitarize or whether the U.S. should build a new long range bomber or whether Asian democracies need a new missile defense system. There are deeper questions related to the Chinese concept of Comprehensive National Power – a strategic construct that far transcends shear military might and may ultimately provide the key to keeping the peace.

In the Crouching Tiger article and film series that will appear over the next several months in the National Interest, we will systematically work through this framework of Intentions, Capabilities, Strategies, Flashpoints, and Pathways to Peace.   The broader mission: Raise public awareness about an increasing danger – and encourage this year’s bumper crop of presidential hopefuls to address an issue that may very well determine not just the outcome of the 2016 campaign but the prospects of war or peace in Asia.

Peter Navarro is a professor at the University of California-Irvine.  He is the author of Crouching Tiger: What China’s Militarism Means for the World (Prometheus Books) and director of the companion Crouching Tiger documentary film series.