No Clear-Cut Obama Doctrine: Instead, a Roadmap 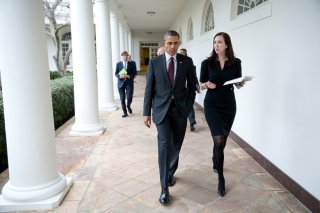 President Obama’s commencement address at West Point was designed to offer a conceptual blueprint for understanding the past six years of U.S. foreign policy as much as it was intended to preview the next two.  It appears to have failed in this respect, with most critics confirmed in their belief that the president has lacked—and continues to lack—an overall framework for setting foreign policy.

The problem is not that the West Point address was short on prescriptions for how the U.S. should discharge itself.  Instead, confusion reigns over whether Obama’s various standpoints can be said to comprise a coherent whole.  Critics argue not.  But there is one common denominator—albeit loosely applied and underdeveloped by Obama—that can knit together what otherwise would appear to be disparate and unconnected strands of strategic logic.  It is called liberal internationalism.

First, Obama repeated his now familiar warning against isolationism.  Like every liberal internationalist, the president stressed the theme of interconnectedness, suggesting that crises in seemingly corners of the world can rapidly spill over to affect the United States.  Even if the U.S. today cannot “bear any burden” as John F. Kennedy once promised that it would, Obama’s America must not turn away from overseas engagement lest it jeopardize its own self-interest in the process.

Second, Obama portrayed an external environment populated not only by other world leaders but also by non-state actors, again betraying a thoroughly liberal understanding of international politics.  While he chose to emphasize the challenges posed by this global reality, singling out non-state terrorism as the primary threat to U.S. security going forward, Obama might also have pointed to the opportunities created by the diffusion of power away from the states.  Indeed, Obama demonstrated his willingness to move beyond state-to-state diplomacy very early on in his presidency, his message to the Iranian people and his Cairo speech being two cases in point.

Third, Obama’s plan to create a $5 billion fund to train allied forces in counter-terrorism can be considered a bold (and decidedly liberal) vote of confidence in multilateralism.  The terrorist threat, of course, has dominated the U.S. national security agenda for well over a decade; trusting others to share in this most emotive of policy areas is not done lightly.

Fourth, and perhaps most importantly, Obama mounted a spirited defense of the most recognizable features of the liberal international order that successive U.S. presidents have striven to build and maintain for seven decades—its primary organizations, rules, norms and values—even conflating the survival of liberal international institutions with the plight of the U.S. itself.

Last, liberal internationalism is evident in Obama’s insistence that the U.S. remains central to the maintenance of world order, whether as an organizer of humanitarian relief efforts or as a focal point for international security efforts.  For Obama, America is the liberal linchpin of almost all meaningful international cooperation.  The phrase that Obama chose to describe America’s world role is telling: “the United States is and remains the one indispensable nation,” he declared.

This label, of course, was first used by Madeleine Albright, Bill Clinton’s second-term Secretary of State.  In resurrecting this unmistakably liberal internationalist language, Obama was associating himself with the only other Democrat to have occupied the presidency in the post-Cold War era.  Ever so subtly, the image was conjured that a pattern of foreign policy behavior obtains in the White House; that the Obama administration operates according to a roadmap.  For Obama as for Clinton, liberal internationalism holds sway.

In sum, there is no clear-cut Obama Doctrine.  Certainly, last week did not assist in the revelation of one.  But, in the guise of liberal internationalism, there is at least a guiding philosophy that has shaped (and continues to shape) Obama’s handling of foreign affairs.  His supporters, critics and the American people alike will have to make do.