No New Strategies Were Delivered in Obama’s Address on ISIS 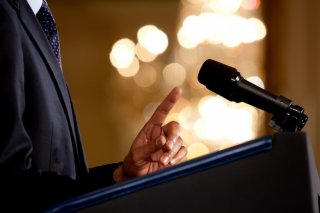 President Barack Obama clearly meant to convey the seriousness of the situation we currently face as a nation from the terrorist group known as the Islamic State (ISIS) by delivering his third address to the nation from the Oval Office Sunday night. The address, however, did not contain any new strategy, or any new ideas, about how to defeat a group that has in quick succession downed a Russian airliner and killed one-hundred-and-thirty people in the heart of Paris and fourteen in San Bernardino, the largest terrorist attack in our homeland since Sept. 11, 2001.

The speech was vintage Obama, right up to the petulant impugning of his domestic opponents’ motives, and the setting up of straw men and the renewed calls for stricter gun control laws.

The president even started the fifteen-minute speech by reminding us that the victims from the terrorist attack in San Bernardino, California, last Wednesday were “white and black; Latino and Asian”—something obviously of great import to Obama but of little value in devising a winning strategy to keep the nation safe.

The president also felt the need to lecture to his fellow Americans to “reject discrimination.” The president continued by stating, “Muslim Americans are our friends and our neighbors.”

These are lofty positions, no doubt, but they’re a response to a problem that has yet to manifest itself.

There was even outright incompetence in the speech, when the president asserted that he’s “ordered the Departments of State and Homeland Security to review the visa waiver program under which the female terrorist in San Bernardino originally came to this country.”

But if he has indeed done that, then he has sent a large bureaucracy on a fool’s errand.

An embarrassed White House admitted within the hour that the suicide terrorist in question had entered the United States on a K1 Fiancé Visa.

How on Earth the president can make such an embarrassing mistake on such an important topic—on only his third national address from the Oval Office, no less—cannot be blamed on an intern.

Our Strategy Is Clearly Not Working

The fact remains that under Obama’s watch, ISIS has come to control an area about the size of Maryland and which it calls a caliphate. What the president referred to as “our strategy to destroy ISIL” did not contain any admissions of mistakes or departures from what is not working.

On the contrary, the president signaled that he was going to stay the course. “The strategy that we are using now . . . that is how we’ll achieve a more sustainable victory,” he said.

As Heritage Foundation Middle East scholar Jim Phillips recently said, it is precisely because “a long string of ISIS victories have given it an aura of invincibility” that the group has been able to bring in 25 thousand recruits from 80 countries.

The Three Points of Obama’s Speech

In fact, the first three points of the four-point plan in the president’s speech were self-evident continuations of what he’s done so far, as Obama himself admitted.

“First, our military will continue to hunt down terrorist plotters in any country where it is necessary,” said the president, explaining that American airstrikes “are taking out ISIL leaders, heavy weapons, oil tankers, [and] infrastructure” and that since the Nov. 13 Paris attacks, the allies have ramped up cooperation.

“Second, we will continue to provide training and equipment to tens of thousands of Iraqi and Syrian forces fighting ISIL on the ground so that we take away their safe havens,” said the president, apparently doubling down on a program that many critics say has failed.

The following point, too, was more of the same. “Third, we’re working with friends and allies to stop ISIL’s operations—to disrupt plots, cut off their financing, and prevent them from recruiting more fighters. Since the attacks in Paris, we’ve surged intelligence-sharing with our European allies.”

The final point may have indicated a capitulation of sorts to Russian President Vladimir Putin. “Fourth, with American leadership, the international community has begun to establish a process—and timeline—to pursue ceasefires and a political resolution to the Syrian war. Doing so will allow the Syrian people and every country, including our allies, but also countries like Russia, to focus on the common goal of destroying ISIL.”

This is our strategy to destroy ISIL.

Obama then went on to call on Congress to pass as a string of pet measures, such as “making it harder for people to buy powerful assault weapons like the ones used in San Bernardino,” ignoring that more people died in Paris with its strong gun control laws and that this would do nothing to prevent terrorist weapons like pipe bombs ,such as the ones the San Bernardino couple had prepared.

Also on the list was asking Congress to “act to make sure no one on a no-fly list is able to buy a gun,” ignoring that all sorts of people without any terrorist background, from the singer Cat Stevens to the journalist Stephen Hayes, are routinely put on that list through bureaucratic error.

What Obama Said He Won’t Do

Almost equally important was what the president vowed he would not do. Number one was being “drawn once more into a long and costly ground war in Iraq or Syria.” There may be many good reasons for that that, but the one offered by the president was something of a contradiction: “That’s what groups like ISIL want. They know they can’t defeat us on the battlefield.”

The second no-go zone was this old chestnut: “Here’s what else we cannot do. We cannot turn against one another by letting this fight be defined as a war between America and Islam”—which is precisely what no serious politician has ever proposed.

Then came the stuff about rejecting discrimination, a non-issue that the president incredibly put on the same standing as the very real matter of Muslims needing to do something to ideologically address extremists in their midst.

Perhaps the worst line of the night—and there were many competitors—came when the president declared that “our success won’t depend on tough talk, or abandoning our values, or giving in to fear.”

Perhaps nobody would be afraid if the president had offered a strategy on how to be tough on the defense of the values of liberal democracy.

Instead we got vintage Obama.

Mike Gonzalez, a senior fellow at The Heritage Foundation, is a widely experienced international correspondent, commentator and editor who has reported from Asia, Europe and Latin America. He served in the George W. Bush Administration first at the Securities and Exchange Commission and then at the State Department. His book,"A Race for the Future: How Conservatives Can Break the Liberal Monopoly on Hispanic Americans," was published in September.