No, North Korea Did NOT Threaten to Blow Up the White House 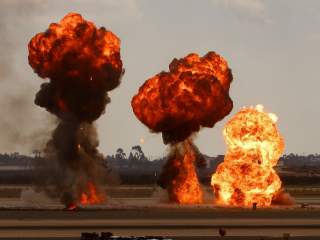 Western media outlets have been having a field day with North Korea’s response to “The Interview” movie in which Seth Rogen and James Franco’s characters’ assassinate North Korean leader Kim Jong-un. Unfortunately, in doing so, the press has frequently sacrificed accuracy for “clickbait” headlines.

The first example of this came in June when the trailer for the movie was released. Soon after it went up on YouTube, North Korea’s Foreign Ministry released a statement condemning the movie. In covering this statement, countless Western media outlets claimed that North Korea had threatened war with the U.S. over the movie’s content. As I noted at the time, the statement in fact did no such thing.

The latest example of the Western media botching its coverage of North Korea came this weekend when Pyongyang responded to America’s accusations that it was behind the cyber attacks against Sony Pictures Entertainment. On Sunday, North Korea’s National Defence Commission released a statement on the Korean Central News Agency (KCNA) responding to the accusations made by President Obama as well as the his promise to retaliate against Pyongyang for the hacks.

Countless ostensibly reputable news sources claimed that  North Korea threatened to “blow up” the White House and Pentagon over the accusations. Others used the slightly more ambiguous term “strike” the White House, providing themselves with more cover.

So what did the National Defense Commission really say?

The vast majority of the statement rehashes points North Korea has already made, including: 1) denouncing “The Interview,” 2) praising the Guardians of Justice-- the cyber unit behind the hack-- for attacking Sony, 3) denying that Pyongyang was in anyway involved in the hack itself and 4) criticizing the Obama administration and president for portraying North Korea as the culprit.

It then notes that “Obama personally declared in public” that the U.S. would take a "symmetric counteraction" against the North for the hack, which the National Defense Commission deems “disgraceful behavior.”

The commission pledges that the “the army and people of the DPRK will never be browbeaten” by this “symmetric counteraction,” and instead will take the “toughest counteraction” itself in response to any American retaliation. Furthermore, the National Defense Commission warns that Pyongyang’s “toughest counteraction” will not necessarily be limited to a “single movie production company” but rather “our target is all the citadels of the U.S. imperialists.”

At this point, the statement finally uses the phrase “blow up” when it says that “The army and people of the DPRK are fully ready to stand in confrontation with the U.S. in all war spaces including cyber warfare space to blow up those citadels [emphasis added]. The following paragraph mentions the White House and Pentagon in stating: “Our toughest counteraction will be boldly taken against the White House, the Pentagon and the whole U.S. mainland, the cesspool of terrorism.”

The key points the commission is making is that North Korea will not be coerced (browbeaten) by Obama’s threats of retaliation because North Korea is prepared to confront the U.S. in any war space the latter chooses. However, as is typical of Pyongyang, the commission is portraying North Korea as the victim (or potential victim, in this case) of an act of aggression by the United States. What the sentence is saying, then, is that North Korea stands ready to counter acts of aggression from the U.S. in any “war space” that Washington chooses. True, it does promise to have a tougher counteraction than whatever Washington does to it. However, since the Obama administration is threatening to place North Korea back on the State Sponsors of Terrorism, Pyongyang is certainly not threatening to respond by blowing up the White House or Pentagon (besides, it doesn’t have those capabilities).

It’s hard to say what type of counteraction one might expect from the North should the Obama administration place it back on the State Sponsors of Terrorism list. However, it’s safe to rule out blowing up the White House or Pentagon.