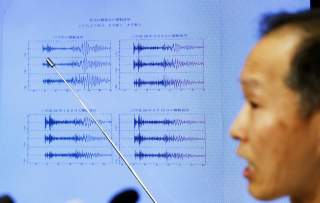 While it’s hard to know for sure what’s really going on in North Korea, one of the most secretive countries in the world, Pyongyang’s underground nuclear test facilities are probably intact, and the regime is likely still capable of testing its rudimentary atomic warhead designs.

The stories in The Wall Street Journal and other newspapers and websites, all citing a Chinese study first obtained by the Hong Kong-based South China Morning Post, are potentially misleading. News reports aggregating The Wall Street Journal’s own, more balanced reporting draw a line between the apparent collapse and upcoming talks between the United States and North and South Korea, but some experts are doubtful.

While it’s hard to know for sure what’s really going on in North Korea, one of the most secretive countries in the world, Pyongyang’s underground nuclear test facilities are probably intact, and the regime is likely still capable of testing its rudimentary atomic warhead designs. “The reporting has been mostly hot garbage,” Jeffrey Lewis, a nuclear expert at the Middlebury Institute of International Studies at Monterey, tweeted after reviewing satellite imagery of the 7,200-foot Mount Mantap, where North Korea’s Punggye-ri test site is located.

Some media speculated that the alleged destruction of Punggye-ri was a factor in the country’s decision to hold talks with the United States and South Korea about halting nuclear testing and formally ending hostilities between the countries.

If Pyongyang can no longer test its nukes, it might as well volunteer to end testing in exchange for economic concessions or some other benefit. Or so the reasoning goes.

Mount Mantap didn’t collapse. Yes, seismologists registered a 6.3-magnitude earthquake under the mountain on September 3, the result of North Korea’s sixth and most recent underground atomic test. And yes, it’s possible that the quake collapsed the subterranean cavity that the buried bomb blast produced.

But it’s unlikely that atomic tests turned Mount Mantap into “fragile fragments,” as the South China Morning Post claimed. The Chinese newspaper drew its conclusions from a study that is scheduled to be published in Geophysical Research Letters, a scientific journal.

An earlier survey of potential damage at Mount Mantap, also published in Geophysical Research Letters, reportedly indicated there had been a collapse at the site, but didn’t say whether the overall facility remained usable. According to The Wall Street Journal, the researchers haven’t explained why.

“Nuclear explosions make cavities,” Lewis explained in a tweet. “One of those cavities collapsed, which seismologists detected. Science is cool. But a cavity collapse does not mean the tunnel complex collapsed, let alone the whole mountain.”

Even if a cavity or part of the adjacent facility was destroyed, there’s no reason North Korean leader Kim Jong Un can’t simply build a new site. “Kim can dig new tunnels quickly to replace the collapsed sites if he chooses to do so,” Bruce Blair, a Princeton University nuclear expert, told me. “He could even test above ground if deemed warranted. There is really nothing technical standing in the way.”

U.S. president Donald Trump has indicated that he might meet with Kim as early as May to discuss a possible end to North Korea’s nuclear program. Experts agree that North Korea hopes to leverage its newfound nuclear-power status for political or economic gain.

“Suspending testing is a good-faith gesture and bargaining ploy that yields what Kim wants out of his testing program politically,” Blair said.

“Kim has agreed to stop nuclear testing because of the summit(s), not because his nuclear test mountain collapsed,” Lewis added.