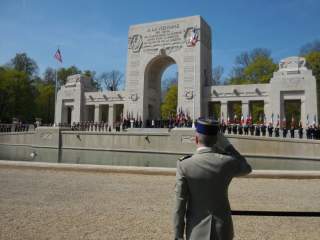 The Normandy American Cemetery is one of the most peaceful and beautiful of its kind in the world. Situated on the bluffs above Omaha Beach, the site of the bloodiest fighting on D-Day, the cemetery is a fitting resting place for many of the Americans who fought and died so that others might be free.

I was there a week ago, walking among the markers to American airmen, soldiers and sailors of different religions and background and from virtually every state and territory. Nothing could have been more surreal. The sun was shining, the grass was green, the sky blue and the beach calm. Among the visitors were large numbers of young people from France, England and several countries on field trips to the cemetery. There was little to connect this peaceful scene with the carnage, sacrifice and heroism that occurred on that same spot.

Today Europe enjoys the longest period of peace, that is the absence of inter-state conflict, in its modern history. The events in Normandy occurred some 72 years ago. It is difficult for all but the few remaining members of the Greatest Generation to recall a time when life, liberty and the democratic way of life was truly in peril. Hence, it is hard for succeeding generations to appreciate a time when our fate as a nation and that of the Free World hung in the balance and men and women from the United Nations willingly put their lives on the line for something other than self-interest.

President Roosevelt faced some of the same difficulties in the years before our entry into the war. Even after December 7, 1941 and Germany’s declaration of war on the United States there were strong factions within the U.S. military and in Congress arguing for a Japan First strategy, since that was the country which had actually attacked the United States.

But Roosevelt understood, far earlier than most American leaders, that the greater threat was from Germany and its control over Europe. By 1941, Hitler essentially had conquered almost half the world’s democracies and cowed several others such as Sweden and Switzerland. If Britain fell, there would be little to stop Germany from continuing its rampage across the rest of the world. The light of freedom could have been extinguished for all mankind.

Today, the Free World faces a threat from anti-democratic forces every bit as serious as that which motivated our parents and grandparents to take up arms. To paraphrase Winston Churchill, there is a gathering storm that threatens the peace not only of Europe but of East Asia and portions of the Middle East. Russia blithely announces it is moving nuclear-capable missiles to Kaliningrad, conducts unrestricted air attacks on Aleppo while warning the United States not to interfere, and repeatedly and openly hacks major U.S. governmental and political institutions. China is seeking nothing less than hegemony over the Western Pacific and domination of major U.S. democratic allies such as South Korea, Japan and Australia. Its actions in the South China Sea contravene well-established international law as well as create a clear threat to the sea lanes. Russia and China are conducting expanded joint military exercises.

As I moved from one individual marker to the next in the Normandy cemetery, I wondered what argument can be made to today’s generation as to the necessity of being willing to risk their lives and fortunes for the defense of the other democracies of the world? I can think of three.

First, democracies exist in a community. They are connected by similar values and practices.  They generally seek the same goals for their people and wish the same for all mankind. The more democracies there are the deeper the connection, the richer the experiences of all and the greater the prospects for further expansion of this community of free nations.

Therefore, a threat to any member of this community, particularly from violence perpetrated by non-democratic forces, is a threat to the entire community. The loss of free nations behind the Iron and Bamboo Curtains which were a hallmark of the Cold War was felt by the remaining community throughout those decades. Put simply, the freedom of one is important to the freedom of all.

Second, the effort to dismantle the community of free nations, to sunder their connections to others, is a process that knows no natural boundaries. An aggressor who is intolerant of one democracy is likely to be opposed to all. Certainly, such an aggressor will find it difficult to countenance the existence of a vibrant democratic community beyond its ability to influence, cow, subjugate or even destroy. Thus, even if the U.S. seeks to withdraw from the world, to show no offense, were it to be the last democracy standing, it would pose an intolerable irritant, even threat, to the anti-democratic forces.

Third, we know from our own experience over more than 200 years that the highest stakes in the pursuit of individual liberty and self-interest as well as the collective expression of democratic governance is life itself. If the fruits of liberty, equality and justice are not worth risking ones’ life to gain, they are not worth having.

So why should Americans again come to the defense of Europe under threat? Because the loss of a continent that has finally achieved democratic governance from the Atlantic to the Black and Baltic Seas would be a catastrophic loss to our own democratic enterprise. Also, because defending democracy and freedom abroad is protecting and preserving it at home. These are the lessons I relearned at the Normandy American Cemetery.