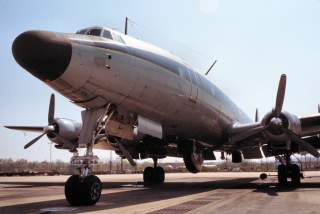 Nixon could find no military option that would convey resolve without the possibility of North Korean retaliation or sustained military operations.

When Pres. Richard Nixon was inaugurated in January 1969, North Korea wasn’t his primary focus. During the 1968 campaign, Nixon had promised “an honorable end to the war in Vietnam.” Compared with Vietnam, Korea was a Cold War backwater. Yet it produced Nixon’s first foreign policy crisis.

Nixon’s term began quietly enough. There were formal calls and meetings with South Korean officials. The administration directed that an update of contingency planning be concluded by April 25, 1969. But on Jan. 30, just 10 days after Nixon was inaugurated, a special national intelligence estimate was circulated. There is no evidence it reached the president.

It argued that “under present conditions, North Korea does not intend to invade South Korea.” But, it would continue harassing allied forces in the Demilitarized Zone and elsewhere. North Korean leader Kim Il Sung was “apparently confident” he could act without significant retaliation from the United States or South Korea.

The chief danger when interacting with the North Koreans was “miscalculation.”

At 12:50 A.M. on April 15, the Situation Room was alerted that an EC-121 reconnaissance plane with 31 Americans aboard had been attacked by two North Korean fighters. National Security Advisor Henry Kissinger learned at 1:10 A.M. At 2:17 A.M., Radio Pyongyang proclaimed that an American plane had entered North Korean airspace and been destroyed.

Still, Kissinger didn’t alert Nixon until morning. When Nixon reached the Oval Office, he felt, according to his memoir, that “we were being tested, and therefore force must be met with force.” The aircraft had never been in North Korean airspace.

Despite Nixon’s desire to retaliate, he acted unhurriedly. A National Security Council meeting wasn’t scheduled until the following day at 10:00 A.M.

A Joint Chiefs of Staff analysis portrayed the incident in the context of the USS Pueblo incident of the previous year, when a U.S. ship and its crew were taken hostage by North Korean forces. The crew were released in December 1968, but the ship was never returned.

The military was prepared to conduct escorted missions in the same area the EC-121 was shot down, high altitude reconnaissance over North Korea itself, and engage North Korean aircraft off the Korean coast, while feints against North Korean air defenses, blockading North Korean ports and air strikes would require a repositioning of forces.

The chiefs suggested that pursuing both types of reconnaissance and attacking North Korean aircraft, while making “diplomatic demands” would be “an appropriate initial response.”

Meanwhile, Nixon and Kissinger were consumed with different means of retaliation. They wanted to seize North Korean assets abroad. One North Korean-owned ship, Kissinger told Nixon in the evening of April 15, was “sailing with Dutch registry and Dutch crew and flag.”

For the entire day, Nixon, Kissinger and Attorney General John Mitchell pursued the location of the ship, and sought to craft legal justifications for its seizure. Nixon said he was determined to take the ship “even if I have to overrule everybody in the State Department.” In the end, no ship was found. “For all I know,” Kissinger remembered, “it never existed.”

Nixon also considered blockading the closest North Korean port, but, given the paucity of ships using the port, and the likelihood that goods would just transit through other ports, the idea was ultimately dismissed.

The next morning, before the NSC meeting, CIA Director Richard Helms was briefed that the incident represented an aspiration to “revive a high level of tension with the United States.” This allowed the North Koreans to “upstage” Russia and China and contrast a bold, vigorous, North Korea with the caution of the major communist powers.

It shifted domestic attention from their inability to reunify the peninsula and keep pace with South Korea economically. The briefing claimed that observers of Kim Il Sung had witnessed increased recklessness, arrogance and “a proclivity for wishful thinking.”

When Helms spoke to the NSC, he reported that even with U.S. air support, South Korean and North Korean forces had “about even capabilities.” Chairman of the Joint Chiefs of Staff Earle Wheeler observed that most military options had drawbacks, either in the unlikelihood of success or in the likelihood of substantial retaliation. The meeting ended without any course of action.

As Nixon prepared for a press conference on April 18, he ordered aircraft carriers into the region. They would take several days to arrive from Southeast Asia. Unbeknownst to him, Secretary of Defense Laird had halted reconnaissance in the area. Nixon and Kissinger were shocked to learn of this unilateral move only after the crisis was over.

At the press conference, Nixon announced that reconnaissance flights would be escorted. He also secretly ordered the resumption of the bombing of Cambodia. Nixon and Kissinger still discussed other responses, but when Kissinger found that Laird, Helms and Secretary of State Rogers were all against retaliation, the decision seemed settled.

Why, then, did Nixon hesitate? Why didn’t he allow a real retaliation or diplomatic maneuver? Kissinger blamed Nixon’s nerves about the coming press conference — “an experience that usually filled him with such a combination of dread and exhilaration as to leave no energy for other reflection” — and a general laxity in handling the crisis across the administration.

No direction was given to the executive departments regarding the aims of the administration. “It was a good way to collect options but also waste time if one was reluctant to act,” Kissinger recalled. Nixon rationalized that strikes on communists in Cambodia were sufficient — implicitly that members of the communist sphere were limbs of the same body.

Nixon never made a formal diplomatic request for redress. He said to Kissinger on the night of April 15, 1969 that he wanted the North Koreans to pay damages and return the USS Pueblo. These diplomatic options were discussed in the NSC meeting on April 16.

The administration never asked for either one. Nixon could find no military option that would convey resolve without the possibility of North Korean retaliation or sustained military operations.

Nixon and Kissinger both felt they had not lived up to their first crisis. “Our deliberations were banal and irrelevant,” Kissinger remembered, “we rarely addressed the central issue.”