North Korea Isn't the Only Korea with Killer Missiles 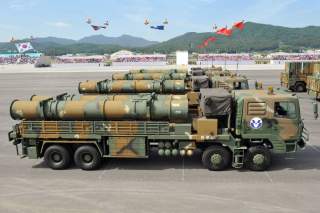 Over the past two years, North Korea has been testing missiles at an unprecedented rate. During this time, it has unveiled a host of new missile systems, culminating in the July 4 test of an intercontinental ballistic missile. While Pyongyang’s provocations have rightly dominated global headlines, far less attention has been paid to the other side of the thirty-eighth parallel where South Korea has quietly been bolstering its own missile arsenal.

Seoul’s interest in missile technology dates back to the 1970s. Much like its nuclear program, it has been a periodic source of friction in its alliance with the United States. As the North Korean nuclear threat has grown in recent years, however, Washington has softened its stance on South Korean missiles. The results have been on display as of late, as Seoul tested its most advanced ballistic missile in late June.

With tensions heating up on the Korean Peninsula, it’s worth reviewing what the Republic of Korea has in its missile arsenal.

South Korea initially became interested in ballistic missiles in the 1970s, when the country was also pursuing a nuclear-weapons capability. Although the United States pressured Seoul to abandon its nuclear ambitions, it was less successful on the missile front. In fact, the United States actually agreed to allow South Korea to reverse engineer an American-made Nike Hercules ballistic missile, producing its own missile with both surface-to-air and surface-to-surface capability.

The resulting missile, which South Korea called the NHK-1 (also referred to as the Baekgom, among other names), is solid fueled, over twelve meters in length and .8 meters in diameter. Under pressure from the United States, Seoul agreed to limit its range to 180 km with a payload of five hundred kg. The missile was built by the Agency for Defense Development (ADD) and first tested in 1978.

Shortly after testing the NHK-1, ADD began work on its successor missile, the NHK-2 (also called the Hyonmu-1). The missile is similar to the NHK-1 in being solid fueled, with a similar length and diameter. Work on the missile accelerated following a North Korean assassination attempt on President Chun Doo-hwan in 1983, and Seoul tested the new missile in 1985. According to the Nuclear Threat Initiative, the NHK-2 has greater versatility than its predecessor; it can be equipped with a single high-explosive or cluster-munitions warhead.

Arguably, the biggest difference between the two missiles is that the latter’s range could easily be extended to 250 km from 180 km. Initially, agreements with the United States prohibited South Korea from utilizing this maximum range. After somewhat contentious negotiations between the allies beginning in 1995, however, Washington relented and assented to Seoul joining the Missile Technology Control Regime (MTCR) in 2001. This allowed South Korea to develop missiles with payloads of five hundred kg and ranges up to three hundred km, while also not limiting ranges for missiles with smaller payloads. Subsequently, Seoul deployed a new variant of the NHK-2, called the NHK-2 PIP A (or Hyonmu 2-A), with the longer range.

As North Korea’s capabilities continued to expand throughout the first decade of the twenty-first century, South Korean officials began pushing their American counterparts to relax some of the restrictions agreed to in 2001. This resulted in the allies reaching a new agreement in 2012, in which Seoul was given the greenlight to develop missiles with ranges up to eight hundred km while carrying half-a-ton payloads. This range is significant because it allows missiles fired from the central part of South Korea to reach all of North Korea. The 2012 agreement also gives South Korea the opportunity to develop shorter-range ballistic missiles with payloads up to two tons.

Following this agreement, South Korea began expanding the ranges of its earlier ballistic missiles (the Hyunmoo-2B) as well as building the Hyunmoo-2C ballistic missile, which was tested last month. The latter missile will have the eight-hundred-km range agreed to in 2012. The test in June marked the fourth time Seoul has launched the missile, and it is expected to be operational by the end of this year. Like all members of the Hyunmoo 2, the Hyunmoo 2C is believed to be based partly on the Russian 9K720 Iskander-M system.

In large part to skirt the range limitations of the MCTR, South Korea has also developed a series of Hyunmoo-3 cruise missiles. The Hyunmoo-3 variants have longer ranges than the MCTR allows, but carry payloads that weigh less than five hundred kg. The highly accurate missiles are sometimes compared to America’s Tomahawk missiles. For example, a 2016 CSIS report notes, “Developed indigenously in the ROK, the Hyunmu-3 system is reportedly similar to the US Tomahawk in structure and guidance technology but with a shorter range. It uses an inertial navigation system and technology that matches map images in its computer memory to the features on the ground below it, giving the missile the ability to hit within three meters of its target.”

The Hyunmoo-3A missile was first deployed in 2006 and is believed to have a range of five hundred km. Three years later, Seoul unveiled the Hyunmoo-3B with a range of up to one thousand km. This gave South Korea the ability to reach targets like Beijing and Tokyo, along with all of North Korea. A year later, in 2010, South Korea began work on the Hyunmoo-3C missile, with a range of 1,500 km. According to South Korean media outlets, the missile carries a “450-kilogram warhead measures 6 meters in length and 53-60 centimeters in diameter and weighs 1.5 tons.” It reportedly went into service in 2012. This put South Korea on a very short list of countries that field cruise missiles with ranges of 1,500 km or greater.

In 2013, South Korea signed a contract with Germany to purchase 170–180 Taurus KEPD 350K air-launched stand-off cruise missiles. The missiles were delivered last year and are integrated on South Korea’s Boeing F-15K Slam Eagle aircraft. South Korea’s version of the missiles are enhanced with U.S. GPS receivers that can’t be jammed by North Korea. In discussing how the KEPD 350K missiles bolster the South Korean Air Force’s capabilities, military officials have said, “If armed with the Taurus missile, the plane can hit North Korea’s capital city of Pyongyang while flying over Daejeon, 164 kilometers south of Seoul.”

This is hardly an exhaustive guide to South Korea’s missile capabilities. For instance, it does not discuss the missiles on South Korea’s submarines or it’s space launch vehicles. Nonetheless, it does show that while North Korean missile tests receive plenty of headlines, South Korea has not not been passive in responding.