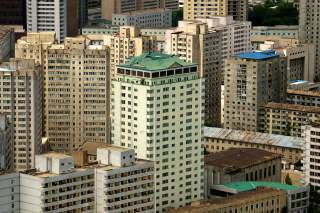 Pyongyang’s newest high-rises are not all they’re cracked up to be, according to South Korean media reports.

Ryomyong Street is a massive real estate project filled with tall buildings, some over 70 stories, consisting of about 3,500 apartments. Kim Jong-un first announced the project a little over a year ago. The structures are considered to be symbols of strength and defiance as international pressure on the regime mounts, but a number of North Korean officials are afraid to actually live in the apartment buildings, according to Daily NK.

“There are critical problems over the quality and safety of the construction, as it was carried out with an over-emphasis on construction speed leading to questionable workmanship,” reports Daily NK’s Choi Song Min, who has been covering the development of Ryomyong Street in Pyongyang, adding, “This is not just a personal opinion but a fact, with the officers and staff involved in the project sharing the same concerns.”

The project was launched as a show of strength, but it began without sufficient materials. To build the complex on Ryomyong Street, locals were forced to surrender their cooking pots and other sources of metal. If a family was unable to provide the necessary materials, they paid fines.

“It is no exaggeration to say that the framework and concrete structures along Ryomyong Street were made from the sweat and blood of the residents,” Choi explained.

The high-rises on Ryomyong Street were built in one year’s time. In countries where standard constructions processes are carried out, it would have taken around three years. The emphasis on speed is something that emerged under North Korean founder Kim Il Sung and has persisted throughout the three regimes of the Kim regime.

Projects such as these are designed “to promote [the regime’s] image as an unparalleled architect of prosperity and development,” but North Korea builds its structures manually at high speeds, leading to slipshod construction and workplace accidents. If a worker dies during construction, a “patriotic martyr” commendation will sometimes be sent to their family.

“Accidents involving falls, cave-ins, and collapses are prevalent in the construction of Pyongyang apartments,” Choi revealed. An 18-story apartment building on Reunification Avenue collapsed in the 1980s, killing 90 engineers. Two years ago, a building collapsed in Pyongchon, ending the lives of a number of workers. That same year, many students were killed in North Hamgyong Province when a five-story apartment building collapsed. The regime sent the families of the dead students television sets to compensate for the loss of their children.

“Officials agree that the apartments along Ryomyong Street pose the highest safety risks,” Choi told Daily NK, “There are many fears” because of how quickly the buildings were built. “An official from the Ministry of People’s Security claimed that he would not move into the apartments even for free.”

“Murmurs that the Ryomyong Street apartment complex is just as worthless as the Ryugyong Hotel are already circulating,” Choi told reporters. The 105-story Ryugyong Hotel is one of North Korea’s more iconic structures. When the project was abandoned due to lack of funds, homeless children reportedly settled inside, often getting in altercations with the local authorities. Construction was eventually restarted, and the hotel was completed in 2012.

High-rise buildings in North Korea often have power failures and limited water supplies. A defector told Radio Free Asia last month that the new high-rises are likely to face the same fate. “It will be hard to find residents for the high-rise floors, and eventually those floors will be occupied by homeless children just as they are in the other buildings.”