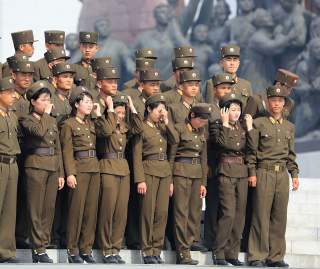 Under the watchful eye of North Korean dictator Kim Jong-un, the Korean People’s Army rolled out waves of weapons for war, including some never before seen technology, in a military parade celebrating a day of national significance. April 15 is the Day of the Sun, the anniversary of the birth of North Korean founder Kim Il-sung.

The grand finale was the presentation of what appear to be two new types of solid-fueled, canister-launched intercontinental ballistic missile models, but could easily be empty, non-functional displays. The South Korean military assesses that the North just revealed two ICBM variants in its parade. This represents a major development.

It is unclear exactly what these are. “We saw two brand new wheeled transporters with canisters. What is inside them? A new ICBM? Two new ICBMs? Nothing?” Jeffrey Lewis, the director of the East Asia Nonproliferation Program in the James Martin Center for Nonproliferation Studies at the Middlebury Institute of International Studies at Monterey, tweeted.

Some observers suspect that they could carry the KN-08 and KN-14, two ICBMs.

“A lot of this may be intimidation or bluffing, but it’s potentially a sign of things to come,” Dave Schmerler, a research associate at the Middlebury Institute of International Studies in Monterey, told Wall Street Journal reporters.

The flatbed setup resembles an old Chinese DF-31, while the other looks a lot like a Russian Topol.

“The signal that they’re trying to send is that they are moving ahead with solid-fuel missiles,” Melissa Hanham, an expert at the James Martin Center for Nonproliferation Studies in California, observed, referring the new ICBM models. The North Koreans “have an indigenous tank system now so they have more launchers, and they have solid fuel, which means they can launch a lot more of these things in quick succession without having to refuel

The North also presented a number of new Transporter Erector Launchers (TELs), which allow North Korean missiles to be fired from anywhere rather than from fixed positions. Road-mobile, solid-fueled missiles are much harder to track, require less prep time, and are less vulnerable to preemptive strikes.

Other highlights from the parade included the first public presentation of the the KN-11 and KN-15, respectively a submarine-launched ballistic missile and the land-based modification built on SLBM technology. The latter is a new missile the North Koreans tested in February. During the parade, the North Koreans presented an ICBM with a new TEL setup, indicating that they have three different launch mechanisms for the long-range missiles they are developing.

The biggest developments are, of course, the ICBMs, which move North Korea one step closer to being able to strike the continental U.S. with a nuclear-armed missile.

North Korea did not test a nuclear weapon as expected; however, the Punggye-ri test site is still “primed and ready.” It is still too early to rule out a test in the days to come.